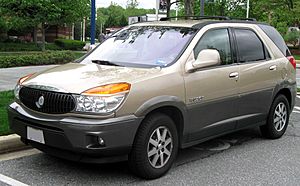 The Buick Rendezvous was a midsize crossover SUV. It was built by General Motors from 2002 to 2007. The Rendezvous was built on a short wheelbase of the GM U platform similar to the Pontiac Aztek. It slotted between the Rainier and the Terraza. From 2002 to 2006, it offered the option of front-wheel-drive or all-wheel drive. This was dropped for the final model year. The Rendezvous was later discontinued due to a drop in sales and replaced by the slightly larger Buick Enclave CUV which also replaced the Rainier and Terraza.

All content from Kiddle encyclopedia articles (including the article images and facts) can be freely used under Attribution-ShareAlike license, unless stated otherwise. Cite this article:
Buick Rendezvous Facts for Kids. Kiddle Encyclopedia.