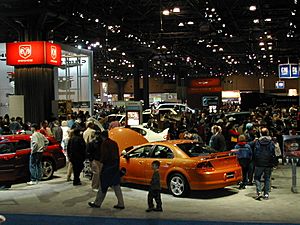 The New York International Auto Show is an annual auto show that is held in Manhattan in late March or early April. It is held at the Jacob Javits Convention Center. It usually opens on or just before Easter weekend and closes on the first Sunday after Easter. In 2016 the show started on March 25 and ended April 3.

The show has been held annually since 1900. The show was held at the New York Coliseum from 1956 to 1987 when the show moved to the Javits Center.

All content from Kiddle encyclopedia articles (including the article images and facts) can be freely used under Attribution-ShareAlike license, unless stated otherwise. Cite this article:
New York International Auto Show Facts for Kids. Kiddle Encyclopedia.