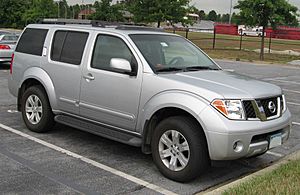 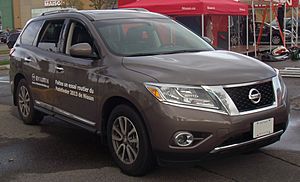 The Nissan Pathfinder is a midsize crossover SUV made by Nissan Motor Company. Its competitor was originally the Toyota 4Runner. It has been around since 1986 and has been changed since then. The most recent change was in 2010. There were three generations of the vehicle. The fourth generation is a midsize crossover SUV that allows seating for seven. It won the AutoPacific Best in Class Vehicle Satisfaction Award.

All content from Kiddle encyclopedia articles (including the article images and facts) can be freely used under Attribution-ShareAlike license, unless stated otherwise. Cite this article:
Nissan Pathfinder Facts for Kids. Kiddle Encyclopedia.