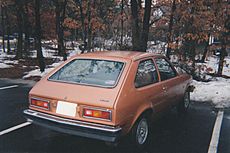 The production for Chevette ended December 23, 1986. GM replaced this car with a badge engineered version of the Suzuki Cultus, selling it under various names such as Chevrolet Sprint/Sprint Metro, Geo/Chevrolet Metro, Pontiac Fireflty, Holden Barina. The next subcompact vehicle GM made for North America was the Chevrolet Aveo in 2004. The Aveo was later rebranded as the Sonic in 2012.

All content from Kiddle encyclopedia articles (including the article images and facts) can be freely used under Attribution-ShareAlike license, unless stated otherwise. Cite this article:
Chevrolet Chevette Facts for Kids. Kiddle Encyclopedia.