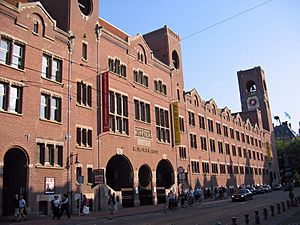 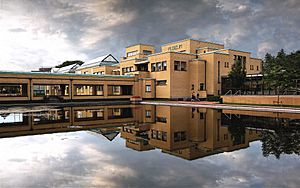 Kunstmuseum Den Haag in The Hague 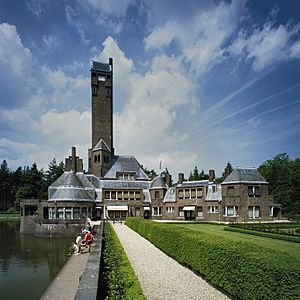 Berlage studied architecture at the Zurich Institute of Technology between 1875 and 1878 after which he traveled extensively for 3 years through Europe. In the 1880s he formed a partnership in the Netherlands with Theodore Sanders which produced a mixture of practical and utopian projects. A published author, Berlage held memberships in various architectural societies including CIAM I.

Berlage was influenced by the Neo-Romanesque brickwork architecture of Henry Hobson Richardson and of the combination of structures of iron seen with brick of the Castle of the Three Geckos of Domènech i Montaner. This influence is visible in his design for the Amsterdam Commodities Exchange, for which he would also draw on the ideas of Viollet-le-Duc. The load-bearing bare brick walls and the notion of the primacy of space, and of walls as the creators of form, would be the constitutive principles of the 'Hollandse Zakelijkheid'.

A visit Berlage made to the U.S. in 1911 greatly affected his architecture. From then on the organic architecture of Frank Lloyd Wright would be a significant influence. Lectures he gave when returned to Europe would help to disseminate Wright's thoughts in Germany.

A notable overseas commission was the 1916 Holland House, built as offices for a Dutch shipping company in Bury Street in the City of London (behind Norman Foster's 30 St Mary Axe of 2003).

Considered the "Father of Modern architecture" in the Netherlands and the intermediary between the Traditionalists and the Modernists, Berlage's theories inspired most Dutch architectural groups of the 1920s, including the Traditionalists, the Amsterdam School, De Stijl and the New Objectivists. He received the British RIBA Royal Gold Medal in 1932.

Berlage died on 12 August 1934 in The Hague. His son, also named Hendrik Petrus Berlage, was an astronomer in Royal Magnetic and Meteorological Observatory in Batavia, Dutch East Indies (now Jakarta, Indonesia), whose name has been immortalized as a lunar crater (Berlage)..

The Berlage Institute has been a postgraduate school for architecture since 1990.

Works of Berlage are in the public collections of Museum de Fundatie, Gemeentemuseum Den Haag, and Kröller-Müller Museum.

All content from Kiddle encyclopedia articles (including the article images and facts) can be freely used under Attribution-ShareAlike license, unless stated otherwise. Cite this article:
Hendrik Petrus Berlage Facts for Kids. Kiddle Encyclopedia.