Port of Amsterdam facts for kids

The Harbour in Amsterdam (1630) by Hendrick Cornelisz Vroom 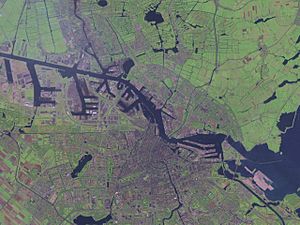 Satellite image of the port of Amsterdam, with the North Sea Canal

The Port of Amsterdam is a port located in the city of Amsterdam, in the Netherlands. Looking at the amount of cargo shipped, the port is the 4th most important in Europe. The port was created in the 13th century. It was one of the main ports of the Dutch East India Company, in the 17th century. Today, it is the second largest port in the Netherlands, after the port of Rotterdam. The North Sea Canal connects the port to the North Sea. The port of Amsterdam is mostly used for bulk cargo. In 2013, about 95 million tons of goods passed through one of the ports in Amsterdam. 79 millon tons of these were bulk cargo. About 60.000 people work in the port.

All content from Kiddle encyclopedia articles (including the article images and facts) can be freely used under Attribution-ShareAlike license, unless stated otherwise. Cite this article:
Port of Amsterdam Facts for Kids. Kiddle Encyclopedia.