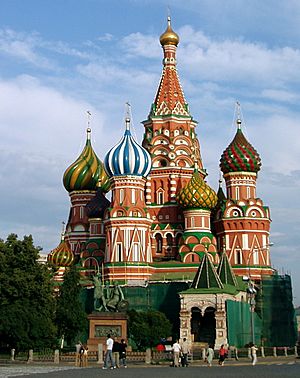 St. Basil's Cathedral, also known as the Cathedral of Intercession, is a very famous cathedral in Moscow, Russia was commissioned by Ivan IV (Ivan the Terrible), for Saint Basil the Blessed. It is in the area called Red Square. It was built in 1555-1560.

The cathedral is very magnificent. It has 8 distinctive onion-shaped towers. The building itself is made up of separate chapels. There is a ninth spire in the middle, forming an eight-point star. The Cathedral should not be mistaken for the Moscow Kremlin.

The cathedral has escaped destruction many times. Napoleon Bonaparte decided to take it to Paris, but such an undertaking would have been impossible. Instead, he ordered it to be demolished. Explosives were lit, but torrential rain suddenly started, extinguishing the fuses. Joseph Stalin also ordered it to be destroyed, since it interfered with parades. However, his architect stood on the stairs and demanded that he leave the cathedral, or he would slit his own throat then and there. Miraculously, Stalin agreed. The city of Moscow also caught fire numerous times, and the cathedral wasn't spared. Even so, it still stands to this very day.

All content from Kiddle encyclopedia articles (including the article images and facts) can be freely used under Attribution-ShareAlike license, unless stated otherwise. Cite this article:
St. Basil's Cathedral Facts for Kids. Kiddle Encyclopedia.