Church of Christ the Cornerstone facts for kids

Church of Christ the Cornerstone is an Ecumenical church in Milton Keynes, Buckinghamshire. It was completed in 1991 and has the Church of England, the Baptist Union, the Methodist Church, the Roman Catholic Church and the United Reformed Church working together and share the space. It is situated in Central Milton Keynes on Saxon Gate, between Midsummer and Silbury boulevards, with the Fred Roche Memorial Gardens behind it. It was the first ecumenical metro centre church in the United Kingdom.

In late September 1979, a Local Ecumenical Partnership was created. It commenced with a service of dedication in Middleton Hall in Central Milton Keynes Shopping Centre. On 6 April 1980, the present congregation met at a site called Centrecom on North Row. At Easter 1981, they moved next door to Milton Keynes Central Library. 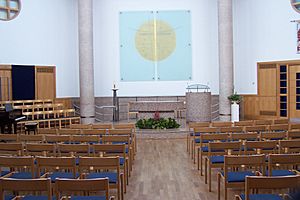 On 31 May 1990, The Baron Campbell of Eskan, the first Chairperson of Milton Keynes Development Corporation, broke ground on the site. On 4 June 1990, construction work on the church. Iain Smith, of Planning Design Development in Milton Keynes, designed the church. The Church Square, around the site was built by Beazer Developments and the church building was constructed by Marriotts of Rushden.

On 20 December 1991, construction was completed at the church was handed over. On 12 January 1992, the congregations moved into the new church. On 29 March 1991, the cross was placed on top of the church. It was designed by Alan Evans, an artist from Stroud in Gloucestershire.

To the top of the lantern, the church is 101 feet high and the cross adds another 18 feet to the height.

On 13 March 1992, the church was dedicated by Queen Elizabeth II in a service where the music was composed by Jonathan Dove.

All content from Kiddle encyclopedia articles (including the article images and facts) can be freely used under Attribution-ShareAlike license, unless stated otherwise. Cite this article:
Church of Christ the Cornerstone Facts for Kids. Kiddle Encyclopedia.