The Southwest National Park is a 618,267-hectare (1,527,770-acre) national park in the south-west of Tasmania, Australia. The park is the largest in Tasmania and is part of the Tasmanian Wilderness World Heritage Area.

The eastern side of the park is 93 kilometres (58 mi) west of Hobart and the park stretches to the west and south coasts. This park covers most of the wilderness areas in Tasmania's south west. The park is well known for its untouched wilderness and remoteness. Weather in the park is can change quickly, and can be severe. The area has not been changed by humans. Evidence shows that Tasmanian Aborigines have visited the area for at least 25,000 years. European settlers have made a few trips into the park, but there has been very few long lasting settlements and little change to the natural environment. Within the area there is only one road, to the hydroelectricity township of Strathgordon. The southern and western parts the park can only be reached by foot, boat, or light aircraft.

The tiny town of Melaleuca in the extreme south-west has a runway for airplanes to land, and basic facilities for the National Parks Service. 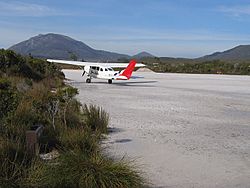 A tourist plane prepares for take-off from the Melaleuca Airstrip

The Melaleuca area is the summer breeding grounds of the highly endangered orange-bellied parrot .

There are two ways to reach the park by land: the Gordon River Road to the hydroelectricity township of Strathgordon and the Huon Highway to Cockle Creek. The southern and western areas of the park can only be reached by foot, boat, or light aircraft. There are two main walking tracks cross the park. The Port Davey Track and the South Coast Track. The walks are generally for more experienced walkers, and take about ten to fourteen days to complete. A flight to or from Melaleuca may be arranged to split the walk, or for tourist access for day trips. Several more difficult walks also exist, including the Eastern and Western Arthur Ranges, Precipitous Bluff, the South West Cape, and Federation Peak. These are not suitable for inexperienced walkers, or for people traveling alone. Sea access to the park is from Port Davey and Bathurst Harbour.

Other National Parks and reserves in the Tasmanian Wilderness World Heritage Area are:

All content from Kiddle encyclopedia articles (including the article images and facts) can be freely used under Attribution-ShareAlike license, unless stated otherwise. Cite this article:
Southwest National Park Facts for Kids. Kiddle Encyclopedia.