The Cradle Mountain-Lake St Clair National Park is part of the Tasmanian Wilderness World Heritage Site. It is a large park with lakes, temperate rainforests and alpine heathland. Cradle Mountain is a jagged dolerite mountain peak. There are sites around the park where the Australian Aborigines lived 10,000 years ago during the last ice age. Tasmania's tallest mountain, Mt. Ossa, 1,617 m (5,305 ft) above sea level, is in the park.

In 2005, the Tasmanian Parks and Wildlife Service introduced a booking system and fee for use of the Overland Track over peak periods. Initially the fee was $100, but this was raised to $150 in 2007, and as at August 2011 is $180. The money that is collected is used to finance the park ranger organisation, track maintenance, building of new facilities and rental of helicopter transport to remove waste from the toilets at the huts in the park.

The Tasmanian Government has moved to allow development in national parks and conservations areas. An 'In principle' permit has been granted for the establishment of an 'eco-friendly' resort at Pumphouse Point at Lake St Clair. 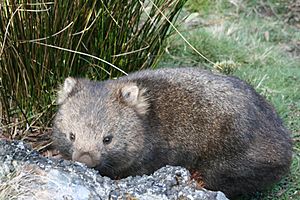 Wombat in the National Park 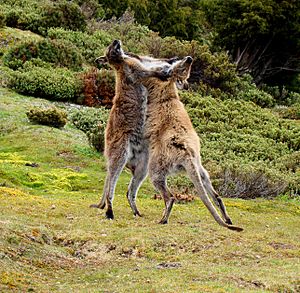 The Cradle Mountain-Lake St Clair National Park is a significant location of Tasmania's endemic species — 40–55% of the park's documented alpine flora is endemic. Furthermore, 68% of the higher rainforest species recorded in alpine areas in Tasmania are present in the Cradle Mountain-Lake St Clair National Park. The park's alpine vegetation is very diverse and has largely escaped forest fires that have caused neighbouring regions to suffer.

The park has been identified as an Important Bird Area (IBA) because it provides habitat for 11 of Tasmania's endemic bird species, as well as for the flame and pink robins and the striated fieldwren. The IBA is important as a representative protected area in north-central Tasmania for those species.

Fungi are also a part of the Park's biodiversity. The Park has a great variety of fungi that perform beneficial ecological roles. In fact, most fungi perform positive rather than negative roles. Even parasitic fungi – often regarded only negatively – are a vital part of healthy ecosystems, regulating ecosystem functions.

Other National Parks and reserves in the Tasmanian Wilderness World Heritage Area are:

All content from Kiddle encyclopedia articles (including the article images and facts) can be freely used under Attribution-ShareAlike license, unless stated otherwise. Cite this article:
Cradle Mountain-Lake St Clair National Park Facts for Kids. Kiddle Encyclopedia.