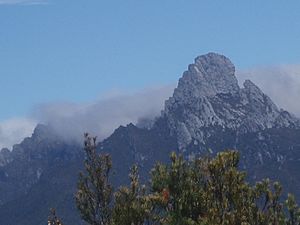 Federation Peak from a distance on the Farmhouse Creek route 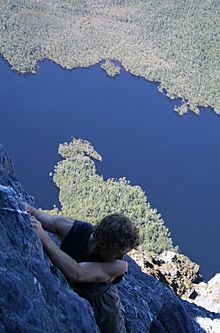 The Direct Ascent of Federation Peak, Lake Geeves is in the background

Federation Peak is a Tasmanian mountain with a sharp spire-like shape, which marks the end of the Eastern Arthur Range in the Southwest National Park. The peak, approximately 90 kilometres (56 mi) south-west from Hobart, was named after the Federation of Australia.

With an elevation of 1,224 metres (4,016 ft) above sea level the last stretch of the route up is extremely steep and exposed, involving rockclimbing like moves 600 metres (2,000 ft) above Lake Geeves. Its reputation is such that Sir Edmund Hillary declared it "Australia's only real mountain".

The first westerner to sight the peak was the surveyor James Sprent who was carrying out a trigonometrical survey of Tasmania. He described it as "the Obelisk". It became known as Sprent's Obelisk, however in 1901 it was officially named Federation Peak in honour of the Federation of Australia by Thomas Bather Moore while cutting a track from Hastings to Port Davey via Old River.

It took almost 50 years after the first western sighting for the summit to be reached, a testament to the harshness of southwest Tasmania. Challenges include thick horizontal scrub, ancient cool temperate rainforest, harsh terrain and unpredictable weather generated by the roaring forties.

After several unsuccessful attempts by various groups in the late 1940s, a party from the Geelong College Exploration Society led by John Béchervaise reached the summit on the 27 January 1949.

The exposed and technical nature of the usual route that is usually climbed unroped has resulted in a number of fatalities; most recently on 23 March 2016 when a bushwalker fell to her death.

The highest elevations of the mountain experience alpine conditions with most of the weather patterns determined by the wind. The mountain receives large amounts of snow in autumn, winter and early spring. Unseasonal snowfalls can be seen in summer though many of them don't settle.

There are a number of graded rockclimbing routes to the summit, most notably Blade Ridge (grade 18), which is a steep knife edge ridge rising out of the cool temperate forest at the foot of the mountain. The ridge joins the main face of the peak a few hundred metres beneath the summit. The climb from the end of the ridge is then up an exposed but well-protected face to the summit, some 600 metres (2,000 ft) above the valley floor. Blade Ridge was first successfully used as a route up Federation Peak in February 1968, by Peter Heddles, Rod Harris, David Neilson and Jack Woods

Most bushwalkers with minimal or no climbing gear take the exposed 'Direct Ascent' scramble from the Southern Traverse of the peak above a drop of 600 metres (2,000 ft) into Lake Geeves (approx grade 5).

The first ascent under true winter conditions was made by Faye Kerr and Max Cutcliffe in September 1954, while a Tasmanian group led by Kevin Doran climbed the Mountain in severe weather over two weeks in August 1978, a trip which cost Doran a toe from cold injuries.

The first, and only, winter ascent of Blade Ridge (a steep sharp ridge on the northern face) was made in 2016 by Mick Wright and Mark Savage, on an expedition led by Andy Szollosi. Their journey is featured in the documentary Winter on the Blade.

All content from Kiddle encyclopedia articles (including the article images and facts) can be freely used under Attribution-ShareAlike license, unless stated otherwise. Cite this article:
Federation Peak Facts for Kids. Kiddle Encyclopedia.