The Arthur Range is a mountain range in the South West Wilderness, located in south-west Tasmania, Australia. The range is broken into two main sections, the Western Arthurs and the Eastern Arthurs. Both sections of the range are popular overnight bushwalking destinations, generally in summer.

The Arthur Range lies in the traditional country of the South-West Nation of the Aboriginal Tasmanian people and the traditional name is Loinnekumme (LOINNE.KUM.ME). The range was renamed by George Augustus Robinson for Governor George Arthur after Robinson climbed Mount Frederick (now Mount Hayes) in March 1830.

It is mainly composed of Quartzite and features evidence of past glaciation such as moraines and hanging valleys. 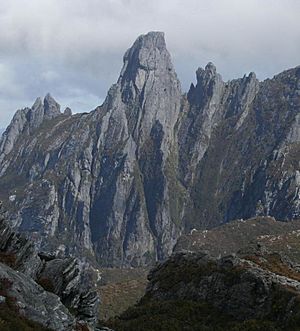 Birds are the most common animals (e.g. Yellow-tailed Black Cockatoos). In dryer areas, Pademelons may also be seen.

The climate in the Arthur Range is extremely unstable – weather predictions are virtually useless here, as it is very common to have sun, heavy rain, cloud, strong winds, even snow all in the same day. The top of the range is classed as Sub-Alpine or Alpine. During winter these mountains are snow-capped. Snow has been experienced every season, with regular snowfalls during summer, though many of these snowfalls don't settle. The climate is mostly decided by the wind. The temperature can change very quickly with warm air from Northern Tasmania, or very cold air from the Southern Ocean and Antarctica.

As with other parts of Tasmania's south-west, the trails are extremely muddy – very frequently it is more than ankle deep. The mud does not dissipate with altitude up the mountain range either, except where there is bare rock.

Like many other parts of Tasmania, this area is susceptible to Phytophthora (root rot). To avoid spreading it, walkers are encouraged to stay to the main trail. In order to reduce mechanical damage to plants, walkers are also encouraged to wade through the middle of muddy track sections.

Hikers should ensure they are well prepared for any weather conditions, and have enough food for one or two extra days.

The Western Arthurs extends generally East-West from Mount Hesperus to West Portal. This section of the range was first traversed in the early 1960s.

The Western Arthurs are studded with many lakes formed from ice-age glaciers. Among these are:

From the north western end, closest to the Port Davey Track:

The Eastern Arthurs runs North-South from the end of the Western Arthurs and includes the highest peak of the range, the striking Federation Peak. This section of the range was first traversed in December 1947 by a group from the Hobart Walking Club.

From the north include:

All content from Kiddle encyclopedia articles (including the article images and facts) can be freely used under Attribution-ShareAlike license, unless stated otherwise. Cite this article:
Arthur Range (Tasmania) Facts for Kids. Kiddle Encyclopedia.