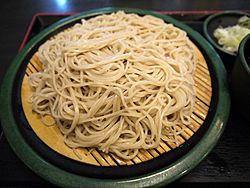 Soba served on a zaru

Soba (蕎麦code: ja is deprecated ) is a type of thin Japanese noodle. It is made from buckwheat flour. It is served either chilled with a dipping sauce, or in hot broth as a noodle soup. Moreover, it is not uncommon in Japan to refer to any thin noodle as soba in contrast to udon which are thick noodles made from wheat.

Because noodles made out of pure buckwheat can easily fall apart when boiled, the buckwheat flour is usually mixed with binders - often wheat flour. Under the Japan Agricultural Standards regulations, the noodles must contain at least 30% buckwheat in order to be called soba but noodles with a high buckwheat content are seen as more desirable. The raw noodles are made by making a dough out of buckwheat flour and binder. The dough is then spread out flat. After that, strands of noodles are sliced off with a special knife. The quality of noodles is highly dependent on the skill of the maker, especially for soba noodles with high buckwheat content. The raw noodles are boiled before being served hot or cold.

In Japan, soba noodles are served in a variety of situations. They are a popular inexpensive fast food at train stations throughout Japan, they are served by exclusive and expensive specialty restaurants, and they are also made at home. Markets sell dried noodles and men-tsuyu, or instant noodle broth, to make home preparation easy.

Some establishments, especially cheaper and more casual ones, may serve both soba and udon (thick wheat noodles) as they are often served in a similar manner. However, soba is traditionally the noodle of choice for Tokyoites. This tradition originates from the Edo period. At that time, the population of Edo (Tokyo) was much richer than the rural poor, were more susceptible to beri beri because of their high consumption of white rice which is low in thiamine. They are thought to have made up for this by regularly eating thiamine-rich soba. Every neighbourhood had one or two soba establishments, many also serving sake, which functioned much like modern cafes where locals would drop by casually.

Soba is almost always eaten with chopsticks, and in Japan, it is traditionally considered polite to slurp the noodles noisily. This is especially common with hot noodles, as drawing up the noodles quickly into the mouth acts to cool them down.

Like many Japanese noodles, soba noodles are often served drained and chilled in the summer, and hot in the winter with a soy-based dashi broth. Extra toppings can be added onto both hot and cold soba. Toppings are chosen to reflect the seasons and to balance with other ingredients. Most toppings are added without much cooking, although some are deep-fried. Most of these dishes may also be prepared with udon. Soba noodles often have a witdh of around 1.5 mm.

Chilled soba is often served on a sieve-like bamboo tray called a zaru, sometimes garnished with bits of dried nori seaweed, with a dipping sauce known as soba tsuyu on the side. The tsuyu is made of a strong mixture of dashi, sweetened soy sauce and mirin. Using chopsticks, the diner picks up a small amount of soba from the tray and swirls it in the cold tsuyu before eating it. Wasabi, scallions, and grated ginger are often mixed into the tsuyu.

Soba is also often served as a noodle soup in a bowl of hot tsuyu. The hot tsuyu in this instance is thinner than that used as a dipping sauce for chilled soba. Popular garnishes are sliced scallion and shichimi toragashi (mixed chili powder).

Soba is traditionally eaten on New Years Eve in most areas of Japan, a tradition which survives to this day. In the Tokyo area, there is also a tradition of giving out soba to new neighbours after a house move, although this practice is now rare. 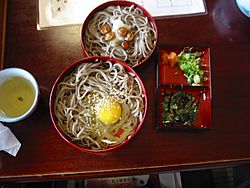 The most famous Japanese soba noodles come from Nagano. Soba from Nagano is called Shinano Soba or Shinshu soba. Ni-hachi (two-eight) soba, consists of two parts of wheat and eight of buckwheat. 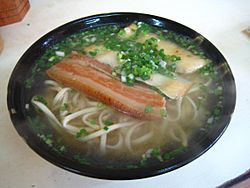 Other uses of the word soba

Soba is also the Japanese word for buckwheat. Roasted buckwheat kernels may be made into a grain tea called sobacha, which may be served hot or cold. Buckwheat hulls, or sobakawa, are used to fill pillows.

Soba is occasionally used to refer to noodles in general. In Japan, ramen is sometimes called chūka soba or shina soba (both mean Chinese noodles). Parboiled chūka soba is stir-fried to make yakisoba. Note that these noodles do not contain buckwheat.

In Okinawa, soba usually refers to Okinawa soba, a completely different dish of noodles made out of flour, not buckwheat. Okinawa soba is also quite popular in the city of Campo Grande (Brazil), due to influence of Japanese (Okinawan) immigrants. It is eaten at street markets or in special restaurants called "sobarias".

All content from Kiddle encyclopedia articles (including the article images and facts) can be freely used under Attribution-ShareAlike license, unless stated otherwise. Cite this article:
Soba Facts for Kids. Kiddle Encyclopedia.