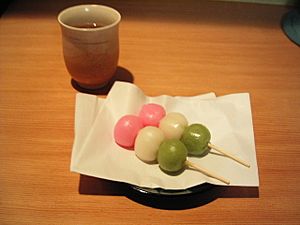 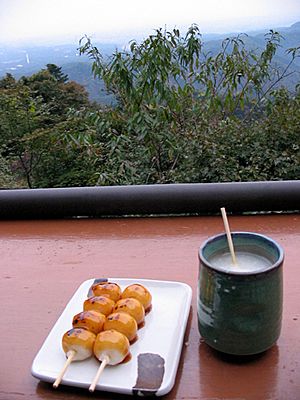 Dango (団子code: ja is deprecated ) is a Japanese dumpling made from mochiko (rice flour). It is sticky and filling. It is often served with green tea.

Dango are eaten throughout the year, but the different types are traditionally eaten in certain seasons. Three to four dango are often served on a skewer. One variety of dango from Hokkaidō is made from potato flour and baked with shoyu (soy sauce).

A common Japanese proverb "Hana yori dango" (花より団子code: ja is deprecated , which translates as "dumplings rather than flowers") is related to the custom of cherry blossom viewing (hanami).

There are many different varieties of dango which are usually named after the various seasonings served on or with it.

All content from Kiddle encyclopedia articles (including the article images and facts) can be freely used under Attribution-ShareAlike license, unless stated otherwise. Cite this article:
Dango Facts for Kids. Kiddle Encyclopedia.