Jeanne Louise Calment (21 February 1875 – 4 August 1997) was a French supercentenarian who has the longest confirmed human lifespan, living to the age of &&&&&&&&&&&&0122.&&&&&0122 years, &&&&&&&&&&&&0164.&&&&&0164 days. She was born and lived in Arles for her entire life, outliving both her daughter and grandson by several decades. Calment became especially well known from the age of 113, when the centenary of Vincent van Gogh's visit brought reporters to Arles. Her lifespan has been extensively verified by census documents, and researchers have investigated her health and lifestyle. 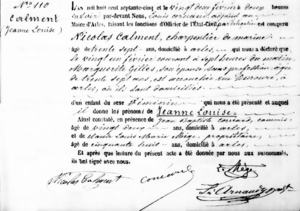 Calment was born in Arles, Bouches-du-Rhône, Southern France on 21 February 1875. Some of her close family members also lived an above-average lifespan, although none lived anywhere near as long as Jeanne: her older brother François lived to the age of 97, her father to 93, and her mother to 86.

At the age of 115 she attracted the attention of researchers who wished to interview her, verify her age and identify factors promoting her longevity. They analysed her for over a year and reported that 's vision was severely impaired by cataracts, yet she refused to have a routine operation to restore her vision; she had a moderately weak heart.

On the other hand, she always had good digestion and slept well. During the last years her height was 4 ft 6 in [137 cm] and her weight was 88 pounds [40 kg]; she confirmed that she had always been small, but she had lost weight in recent years. In terms of pigmentation, her eyes were light gray and her white hair had once been chestnut brown.

With regards to her diet, the three researchers' interviews revealed that in the care home she said she always had a dessert with every meal. She complained about the blandness of the food in the care home and, given a choice, would wish to order fried and spicy foods. She occasionally ("more than once") feasted on chocolate in her old age: sometimes over a kilogram (2.2 lb) of chocolate per week.

Jeanne Calment was compared with a list of nearly 20 people worldwide who had securely been verified to have attained at least 115 years of age. The researchers concluded that the lives of these people differed widely, and that there were but few common characteristics: the overwhelming majority were female (only two were male), most smoked little or not at all, and they had never been obese. They all seem to have had strong characters, but certainly not all were domineering personalities. Although they aged slowly, all became very frail and their physical functions declined markedly, especially after their 105th birthdays.

All content from Kiddle encyclopedia articles (including the article images and facts) can be freely used under Attribution-ShareAlike license, unless stated otherwise. Cite this article:
Jeanne Calment Facts for Kids. Kiddle Encyclopedia.