Bouches-du-Rhône (Occitan: Bocas de Ròse, lit. "Mouths of the Rhône") is a department in the south of France named after the mouth of the Rhône River. It is the department of the Provence-Alpes-Côte d'Azur region with more people living in it.

Bouches-du-Rhône is one of the original 83 departments created during the French Revolution on 4 March 1790. It was made with part of the old province of Provence and was divided in six districts: Tarascon, Apt, Aix, Marseille, Salon and Arles, with Aix as is capital.

In 1800, with the creation of the arrondissements in France, the six districts were changed into three arrondissements: Marseille, Aix and Tarascon. The prefecture was moved from Aix to Marseille.

In 1817, the subprefecture of Tarascon was moved to Arles. The arrondissement of Istres was created in 1981.

The department is surrounded by the 3 departments in 2 regions:

The department is bordered by the Rhone river to the west and the Durance river to the north. The Rhone divides into the Grand Rhone and Petit Rhone south of Arles; the area between forms the Camargue, a large wetland.

The Frioul archipelago is a group of 4 islands in the Mediterranean Sea approximately at 4 kilometres (2 miles) from Marseille.

The area around Marseille, at an altitude of about 35 m (115 ft), is characterized by climates with dry summers. The Köppen climate classification type for the climate at Marseille is a "Mediterranean climate" and of the subtype "Csa".

There are 4 arrondissements (districts), 29 cantons and 135 communes (municipalities) in Bouches-du-Rhône.

The following is a list of the 29 cantons of the Bouches-du-Rhône department, following the French canton reorganisation which came into effect in March 2015:

Evolution of the population in Bouches-du-Rhône 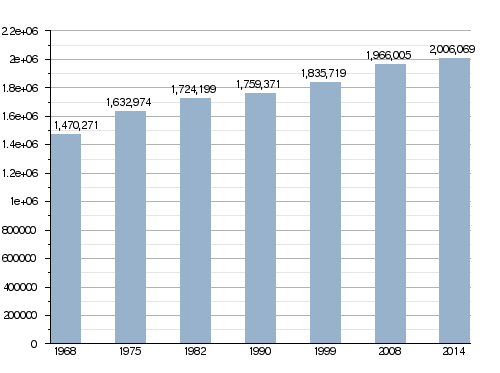 The 10 communes with more inhabitants in the Bouches-du-Rhône department are:

All content from Kiddle encyclopedia articles (including the article images and facts) can be freely used under Attribution-ShareAlike license, unless stated otherwise. Cite this article:
Bouches-du-Rhône Facts for Kids. Kiddle Encyclopedia.