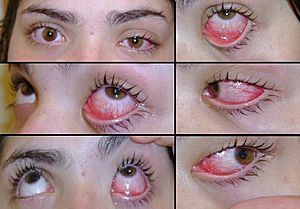 Conjunctivitis, also known as pink eye, is inflammation of the outermost layer of the white part of the eye and the inner surface of the eyelid. It makes the eye appear pink or reddish. There may also be pain, burning, scratchiness, or itchiness. The affected eye may have increased tears or be "stuck shut" in the morning. Swelling of the white part of the eye may also occur. Itching of the eye is more common in cases due to allergies. Conjunctivitis can affect one or both eyes.

The most common infectious causes are viral followed by bacterial. The viral infection may occur along with other symptoms of a common cold. Viral and bacterial cases are easily spread between people. Allergies to pollen or animal hair is also a common cause. Diagnosis is often based on signs and symptoms. Occasionally a sample of the discharge is sent for culture.

Prevention is partly by handwashing. Treatment depends on the underlying cause. In the majority of viral cases, there is no specific treatment. Most cases due to a bacterial infection will also resolve without treatment; however, antibiotics can shorten the illness. Those who wear contact lens as the cause should be treated. Allergic cases can be treated with antihistamine or mast cell inhibitor drops.

About 3 to 6 million people get conjunctivitis each year in the United States. In adults viral causes are more common, while in children bacterial causes are more common. Typically people get better in one or two weeks. If there is visual loss, significant pain, sensitivity to light, signs of herpes, or a person is not improving after a week, further diagnosis and treatment may be required. Conjunctivitis in a newborn, known as neonatal conjunctivitis, may also require specific treatment.

Red eye, swelling of conjunctiva and watering of the eyes are symptoms common to all forms of conjunctivitis. However, the pupils should be normally reactive, and the visual acuity normal.

Viral conjunctivitis is often associated with an infection of the upper respiratory tract, a common cold, or a sore throat. Its symptoms include excessive watering and itching. The infection usually begins with one eye, but may spread easily to the other.

Viral conjunctivitis shows a fine, diffuse pinkness of the conjunctiva, which is easily mistaken for the ciliary infection of iris (iritis), but there are usually corroborative signs on microscopy, particularly numerous lymphoid follicles on the tarsal conjunctiva, and sometimes a punctate keratitis. 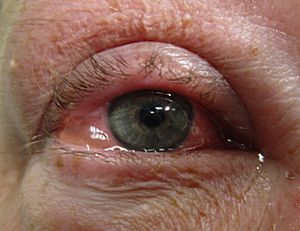 Allergic conjunctivitis is inflammation of the conjunctiva (the membrane covering the white part of the eye) due to allergy. Allergens differ among patients.

Symptoms consist of redness (mainly due to vasodilation of the peripheral small blood vessels), swelling of the conjunctiva, itching, and increased lacrimation (production of tears). If this is combined with rhinitis, the condition is termed "allergic rhinoconjunctivitis". The symptoms are due to release of histamine and other active substances by mast cells, which stimulate dilation of blood vessels, irritate nerve endings, and increase secretion of tears. 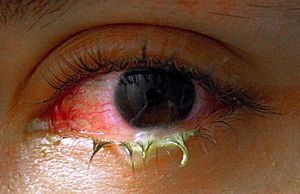 An eye with bacterial conjunctivitis

Bacterial conjunctivitis causes the rapid onset of conjunctival redness, swelling of the eyelid, and mucopurulent discharge. Typically, symptoms develop first in one eye, but may spread to the other eye within 2–5 days. Bacterial conjunctivitis due to common pyogenic (pus-producing) bacteria causes marked grittiness/irritation and a stringy, opaque, greyish or yellowish mucopurulent discharge that may cause the lids to stick together, especially after sleep. Severe crusting of the infected eye and the surrounding skin may also occur The gritty and/or scratchy feeling is sometimes localized enough for patients to insist they must have a foreign body in the eye.

Chemical eye injury is due to either an acidic or alkali substance getting in the eye. Alkalis are typically worse than acidic burns. Mild burns will produce conjunctivitis, while more severe burns may cause the cornea to turn white. Litmus paper is an easy way to rule out the diagnosis by verifying that the pH is within the normal range of 7.0—7.2. Large volumes of irrigation is the treatment of choice and should continue until the pH is 6—8. Local anaesthetic eye drops can be used to decrease the pain.

Conjunctivitis, when caused by an infection, is most commonly caused by a viral infection. Bacterial infections, allergies, other irritants, and dryness are also common causes. Both bacterial and viral infections are contagious and passed from person to person, but can also spread through contaminated objects or water.

Cultures are not often taken or needed as most cases resolve either with time or typical antibiotics. Swabs for bacterial culture are necessary if the history and signs suggest bacterial conjunctivitis but there is no response to topical antibiotics. Viral culture may be appropriate in epidemic case clusters.

A patch test is used to identify the causative allergen in the case where conjunctivitis is caused by allergy.

The best effective prevention is hygiene and not rubbing the eyes by infected hands. Vaccination against adenovirus, haemophilus influenzae, pneumococcus, and neisseria meningitidis is also effective.

Povidone-iodine eye solution has been found to prevent conjunctivitis following birth. As it is less expensive it is being more commonly used for this purpose globally.

Conjunctivitis resolves in 65% of cases without treatment, within two to five days. The prescription of antibiotics is not necessary in most cases.

Viral conjunctivitis usually resolves on its own and does not require any specific treatment. Antihistamines (e.g., diphenhydramine) or mast cell stabilizers (e.g., cromolyn) may be used to help with the symptoms. Povidone iodine has been suggested as a treatment, but as of 2008 evidence to support it was poor.

All content from Kiddle encyclopedia articles (including the article images and facts) can be freely used under Attribution-ShareAlike license, unless stated otherwise. Cite this article:
Conjunctivitis Facts for Kids. Kiddle Encyclopedia.