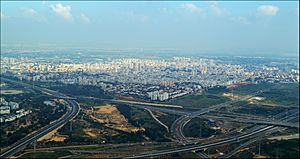 Rishon LeZion from the sky

Rishon LeZion is situated in the Gush Dan region in the Central District, and lies south of Tel Aviv.

It ranks fourth in population and second in newly established settlements.

All content from Kiddle encyclopedia articles (including the article images and facts) can be freely used under Attribution-ShareAlike license, unless stated otherwise. Cite this article:
Rishon LeZion Facts for Kids. Kiddle Encyclopedia.