Eran Zahavi (or Zehavi, Hebrew: ערן זהבי; born 25 July 1987) is an Israeli professional footballer who plays as an attacking midfielder or as a striker for PSV Eindhoven and the Israel national team.

Zahavi has been named Israeli Footballer of the Year twice (2013 and 2014), and finished as the top goalscorer of the Israeli Premier League for three consecutive seasons, in 2013–14 (29 goals), 2014–15 (27 goals) and 2015–16 (35 goals, all-time league record). In December 2014, Zahavi broke the Israeli Premier League record for scoring in consecutive appearances after he scored for the 18th game in a row. In 2016, he broke the Israeli league six-decade-old season scoring record, beating the 1954–55 record. He was named the 2017 Chinese Super League MVP, and broke the league's single-season scoring record in 2019. Zahavi has been a senior international since 2010, earning over 60 caps.

Eran Zahavi was born in Rishon LeZion, Israel, to Jewish parents. He has served in the Israel Defense Forces to complete his mandatory military service.

He also holds a French passport, on account of his French-born father.

Zahavi started his youth career with Hapoel Tel Aviv. At the age of 16 he went to Ironi Rishon LeZion, in his hometown. Two years later, in 2005 he returned to Hapoel. He managed to get to the state cup final with his team but lost to Beitar Jerusalem after a penalty shootout; he scored the equaliser that led to extra time.

A Hapoel Tel Aviv youth product, Zahavi was promoted to its senior team in 2006, where he won the Israel State Cup, and the championship title after a dramatic match against the fierce rival Beitar Jerusalem in which he scored at the 92nd minute of extra time. Zahavi was reported to have garnered interest from clubs in Belgium during the 2009–10 season.

In the 2010–11 season Zahavi became the top assister of the Israeli Premier League, providing 13 assists during the season.

Zahavi signed a five-year deal with the Italian Serie A club, Palermo, before the beginning of the 2011–12 Serie A season. He capped two seasons with 23 appearances in the top league in Italy, scoring two goals versus Bologna and Cagliari. 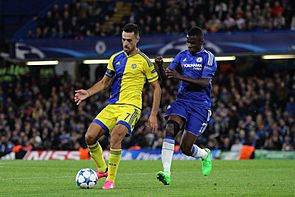 In December 2012, towards the winter transfers window opening, Zahavi showed signs of returning to Israel. Following an agreement made by Palermo and Maccabi Tel Aviv, his former club Hapoel Tel Aviv was given seven days to make a bid on him due to a first-option clause in his contract, but it was not exploited. On 21 January 2013, after over a month of speculation in the media, Maccabi Tel Aviv announced his arrival, signing him on a three-and-a-half year contract for €250,000.

At the Tel Aviv derby on 3 November 2014, Zahavi scored a penalty to equalise the score at 1–1 in the first half but was then attacked by a pitch invader. On retaliating, he was sent off, prompting more pitch invasions which led to the match being abandoned.

In the beginning of the 2015–16 season, Zahavi was appointed as Maccabi's new captain after former captain Sheran Yeini signed at Dutch football club Vitesse. On 5 August 2015, Zahavi scored two goals against Czech team Viktoria Plzeň in a 2–0 away victory in the second leg of the third qualifying round after Maccabi lost at home 2–1. On 19 August 2015, Zahavi scored a brace, including a 96th-minute equaliser, in a 2–2 draw against Swiss side Basel at St. Jakob-Park in the first leg of the Champions League playoffs. On 25 August, during the second leg at Bloomfield, he scored a 24th-minute equaliser as the match ended 1–1, a result that sent Maccabi to the Champions League group stage due to the away goals rule. Zahavi finished the Champions League qualifying phase and play-off round as the top goalscorer with 7 goals in 5 games. During the season Zahavi scored 35 league goals, in 36 league games, and set a new Israeli record for league goals in single season. The previous record was set by the striker Nissim Elmaliach, who scored 30 goals in 26 league games during the 1954–55 season.

On 29 June 2016, Zahavi joined Guangzhou R&F of the Chinese Football League, making him the second Israeli player in China after Liron Zarko. The transfer deal paid Zahavi a reported $12.5 million over two-and-a-half years. On 2 July, Zahavi made his debut coming on from the bench at the 60th minute playing against Shijiazhuang Ever Bright with the score a 1–1 draw. 15 minutes later he scored his first goal, and later on he added an assist to lead his team to a 4–2 victory.

On 13 July, Zahavi scored a hat-trick in 19 minutes in the Chinese FA Cup match against Hebei China Fortune, coming on from the bench in the second half and helping R&F to a 3–0 win. On 18 October, during a league match against Hangzhou Greentown, Zahavi netted his second hat-trick in an R&F jersey, propelling them to a 5–2 victory. He found the net in the 33rd, 55th, and 67th minutes of the match. Those goals gave him 16 goals in as many games for R&F, across all competitions. These scoring exploits quickly earned him the nickname "the King of Yuexiushan".

Zahavi finished his first half season for Guangzhou R&F with six goals in four Chinese FA Cup games, and 11 league goals in 15 appearances. In December 2016, according to media reports, Chinese club Shandong Luneng Taishan F.C. offered $20 million for Zahavi, the highest transfer fee ever offered for an Israeli footballer. On 24 January 2017, Zahavi signed a renewed contract with Guangzhou R&F until the end of the 2020 season, for an estimated $7 million per season. On 23 July, in the league match against Yanbian Funde he scored four goals and Guangzhou won 6–2. Zahavi finished the 2017 season with 27 league goals (one short of the league record) to win the CSL Golden Boot Award. He was also named the Most Valuable Player in the Chinese Super League, and selected in the CSL team of the year.

After Shanghai Greenland Shenhua failed to sign Zahavi in September 2017 for a transfer fee of $25 million, Zahavi renewed his contract with Guangzhou R&F in February 2018 for an estimated $10 million per season on a three-year contract. On 2 March, during round 1 of the 2018 CSL season, Zahavi scored a hat-trick and assisted one goal in the 5–4 away win against reigning champions Guangzhou Evergrande Taobao.

In November 2019, Zahavi broke the CSL single-season scoring record after scoring his 29th goal of the season, surpassing the previous record set by Elkeson in 2014.

On 20 September 2020, Zahavi signed a two-year deal with PSV Eindhoven. He made his debut for the Dutch side on 1 October 2020 in the UEFA Europa League play-offs against Rosenborg, contributing to the win with a goal and an assist.

On 21 July 2021, Zahavi scored a hat-trick during PSV's 5–1 win against Turkish side Galatasaray, in the first leg of the UEFA Champions League second qualifying round match. 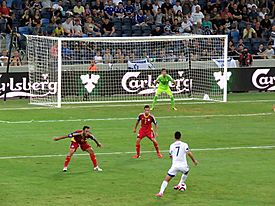 Zahavi playing for Israel in the 2016 Euro qualifiers versus Andorra

Zahavi made his senior debut for Israel on 2 September 2010 against Malta in the UEFA Euro 2012 qualifiers. He scored his first goal for the national team on 10 September 2013 against Russia in the 2014 FIFA World Cup qualifiers.

In the 2020–21 UEFA Nations League match against Slovakia, Zahavi scored three goals in the span of 20 minutes to bring Israel from 0–2 behind to a 3–2 win.

On 9 May 2021, ahead of the Eredivisie match between PSV and Willem II, two armed robbers broke into Zahavi's house in Amsterdam, tying up his wife Shay (née Levy) and three children.

All content from Kiddle encyclopedia articles (including the article images and facts) can be freely used under Attribution-ShareAlike license, unless stated otherwise. Cite this article:
Eran Zahavi Facts for Kids. Kiddle Encyclopedia.