Eliezer Ben‑Yehuda (Hebrew: אֱלִיעֶזֶר בֵּן־יְהוּדָה‬; born Eliezer Yitzhak Perlman, 7 January 1858 – 16 December 1922) was a Hebrew lexicographer and newspaper editor. He was the driving force behind the revival of the Hebrew language in the modern era. 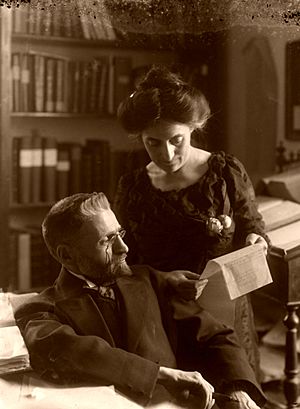 Eliezer Yitzhak Perlman (later Eliezer Ben-Yehuda) was born in Luzhki (Belarusian: Лужкі (Lužki), Vilna Governorate of the Russian Empire (now Vitebsk Oblast, Belarus) to Yehuda Leib and Tzipora Perlman. He attended a Jewish elementary school (a "cheder") where he studied Hebrew and the Bible from the age of three, as was customary among the Jews of Eastern Europe. By the age of twelve, he had read large portions of the Torah, Mishna, and Talmud. His mother and uncle hoped he would become a rabbi, and sent him to a yeshiva. There he was exposed to the Hebrew of the enlightenment which included some secular writings. Later, he learned French, German, and Russian, and was sent to Dünaburg for further education. Reading the Hebrew-language newspaper, HaShahar, he became acquainted with the early movement of Zionism and concluded that the revival of the Hebrew language in the Land of Israel could unite all Jews worldwide.

Upon graduation in 1877 Ben-Yehuda went to Paris for four years. While there, he studied various subjects at the Sorbonne University—including the history and politics of the Middle East. It was in Paris that he met a Jew from Jerusalem, who spoke Hebrew with him. It was this conversation that convinced him that the revival of Hebrew as the language of a nation was feasible.

In 1881 Ben-Yehuda immigrated to Palestine, then ruled by the Ottoman Empire, and settled in Jerusalem. He found a job teaching at the Alliance Israelite Universelle school. Motivated by the surrounding ideals of renovation and rejection of the diaspora lifestyle, Ben‑Yehuda set out to develop a new language that could replace Yiddish and other regional dialects as a means of everyday communication between Jews who moved to Israel from various regions of the world. Ben-Yehuda regarded Hebrew and Zionism as symbiotic: "The Hebrew language can live only if we revive the nation and return it to the fatherland," he wrote.

To accomplish the task, Ben-Yehuda insisted with the Committee of the Hebrew Language that, to quote the Committee records, "In order to supplement the deficiencies of the Hebrew language, the Committee coins words according to the rules of grammar and linguistic analogy from Semitic roots: Aramaic and especially from Arabic roots" (Joshua Blau, page 33).

Ben-Yehuda was married twice, to two sisters. His first wife, Devora (née Jonas), died in 1891 of tuberculosis, leaving him with five small children. Her final wish was that Eliezer marry her younger sister, Paula Beila. Soon after his wife Devora's death, three of his children died of diphtheria within a period of 10 days. Six months later, he married Paula, who took the Hebrew name "Hemda." Hemda Ben-Yehuda became an accomplished journalist and author in her own right, ensuring the completion of the Hebrew dictionary in the decades after Eliezer's death, as well as mobilising fundraising and coordinating committees of scholars in both Palestine and abroad.

In 1903 Ben-Yehuda, along with many members of the Second Aliyah, supported Theodor Herzl's Uganda Scheme proposal.

Ben‑Yehuda raised his son, Ben-Zion Ben-Yehuda (the first name meaning "son of Zion"), entirely in Hebrew. He did not allow his son to be exposed to other languages during childhood. He even berated his wife for singing a Russian lullaby. Ben-Zion thus became the first native speaker of modern Hebrew as a mother tongue.

Many devoted Jews of the time did not appreciate Ben-Yehuda's efforts to ressurect the Hebrew language. They believed that Hebrew, which they learned as a biblical language, should not be used to discuss mundane and non-holy things. Others thought his son would grow up and become a "disabled idiot", and even Theodor Herzl declared, after meeting Ben-Yehuda, that the thought of Hebrew becoming the modern language of the Jews was ridiculous.

In December 1893 Ben-Yehuda and his father-in-law were imprisoned by the Ottoman authorities in Jerusalem following accusations by members of the Jewish community that they were inciting rebellion against the government. 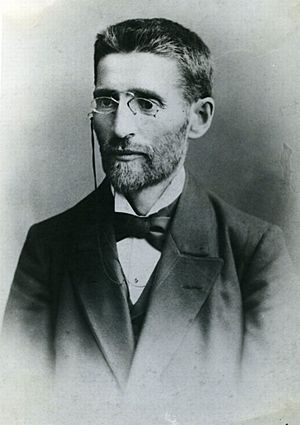 Ben-Yehuda was the editor of several Hebrew-language newspapers: HaZvi, Hashkafa, and HaOr. HaZvi was closed down for a year in the wake of opposition from Jerusalem's ultra-Orthodox community, which fiercely objected to the use of Hebrew, their holy tongue, for everyday conversation. 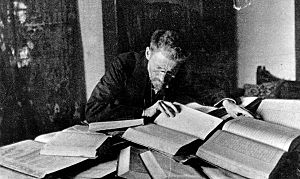 Eliezer Ben-Yehuda while working on the Hebrew dictionary, 1912.

Ben-Yehuda was a major figure in the establishment of the Committee of the Hebrew Language (Va'ad HaLashon), later the Academy of the Hebrew Language, an organization that still exists today. He was the author of the first modern Hebrew dictionary and became known as the "reviver" (המחיה) of the Hebrew language, despite opposition to some of the words he coined. Many of these words have become part of the language but others never caught on.

Ancient languages and modern Standard Arabic were major sources for Ben-Yehuda and the Committee. According to Joshua Blau, quoting the criteria insisted on by Ben-Yehuda: "In order to supplement the deficiencies of the Hebrew language, the Committee coins words according to the rules of grammar and linguistic analogy from Semitic roots: Aramaic, Canaanite, Egyptian [sic] ones and especially from Arabic roots." Concerning Arabic, Ben-Yehuda maintained, inaccurately according to Blau, that Arabic roots are "ours": "the roots of Arabic were once a part of the Hebrew language ... lost, and now we have found them again!" 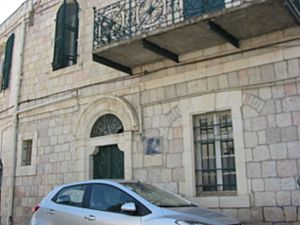 In December 1922, Ben-Yehuda, 64, died of tuberculosis, from which he suffered most of his life. He was buried on the Mount of Olives in Jerusalem. His funeral was attended by 30,000 people.

Ben-Yehuda built a house for his family in the Talpiot neighborhood of Jerusalem, but died three months before it was completed. His wife Hemda lived there for close to thirty years. Ten years after her death, her son Ehud transferred the title of the house to the Jerusalem municipality for the purpose of creating a museum and study center. Eventually it was leased to a church group from Germany who established a center there for young German volunteers. The house is now a conference center and guesthouse run by the German organization Action Reconciliation Service for Peace (ARSP), which organizes workshops, seminars and Hebrew language ulpan programs.

In his book Was Hebrew Ever a Dead Language, Cecil Roth summed up Ben-Yehuda's contribution to the Hebrew language: "Before Ben‑Yehuda, Jews could speak Hebrew; after him, they did." This comment reflects the fact that there are no other examples of a natural language without any native speakers subsequently acquiring several million native speakers, and no other examples of a sacred language becoming a national language with millions of "first language" speakers.

All content from Kiddle encyclopedia articles (including the article images and facts) can be freely used under Attribution-ShareAlike license, unless stated otherwise. Cite this article:
Eliezer Ben-Yehuda Facts for Kids. Kiddle Encyclopedia.