Mary, Princess Royal and Princess of Orange facts for kids

Mary, Princess Royal (Mary Henrietta Stuart; 4 November 1631 – 24 December 1660), was an English princess, member of the House of Stuart, and by marriage Princess of Orange and Countess of Nassau; she also acted as regent for her minor son from 1651 to 1660. She also was the first holder of the title Princess Royal.

The eldest daughter of King Charles I of England and Queen Henrietta Maria, Mary was married to the future stadtholder of the Netherlands, William II of Orange, at 9 years old in 1641. Initially, she remained in England with her parents because of the heated political situation in England until early 1642, when she and her mother left for the Netherlands. Five years later in 1647, Mary's husband inherited the titles of Prince of Orange and Stadtholder of Holland, Zeeland, Utrecht, Guelders, Overijssel and Groningen in the United Provinces of the Netherlands.

Eight days after her husband's death in 1650, Mary gave birth to a son, William III of Orange, who later became King of England, Scotland and Ireland. Mary, who became the only guardian of her son, was not popular in the Netherlands because of her support of her brothers and her difficult relationship with her mother-in-law Amalia of Solms-Braunfels, who considered the princess young and inexperienced. After the restoration of the monarchy in England in 1660, Mary departed for celebrations in London, where she fell ill with smallpox and died. 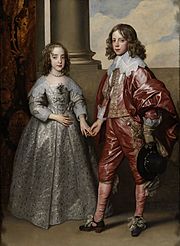 Princess Mary Henrietta was born at St. James's Palace, London. Charles I designated her Princess Royal in 1642, thus establishing the tradition that the eldest daughter of the British Sovereign might bear this title. The title came into being when Queen Henrietta Maria, the daughter of King Henry IV of France wished to imitate the way the eldest daughter of the French king was styled (Madame Royale). Until that time, the eldest daughters of English and Scottish kings were variously titled Lady or Princess (The younger daughters of British Sovereigns were not consistently titled princesses of Great Britain and styled Royal Highness until the ascension of George I in 1714). 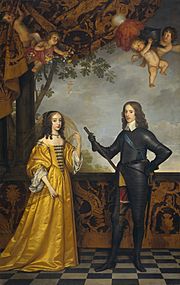 Her father, Charles I, wished the Princess Royal to marry a son of Philip IV of Spain, while her first cousin, Charles I Louis, Elector Palatine, was also a suitor for her hand. Both proposals fell through and she was betrothed to William, the son and heir of Frederick Henry, Prince of Orange and Stadtholder of the United Provinces, and of Amalia of Solms-Braunfels. The marriage took place on 2 May 1641 at the Chapel Royal, Whitehall Palace, London. The marriage was reputedly not consummated for several years because the bride was nine years old. In 1642, Mary moved to the Dutch Republic with her mother, Queen Henrietta Maria, and in 1644, as the daughter-in-law of the stadtholder, Frederick Henry, she became more engaged in courtly and public events.

In March 1647, Mary's husband, William II, succeeded his father as stadholder. However, in November 1650, just after his attempt to capture Amsterdam from his political opponents, he died of smallpox. The couple's only child, Willem (later William III), was born a few days later. Mary, now the Dowager Princess of Orange, was obliged to share the guardianship of her infant son with her mother-in-law, Amalia of Solms-Braunfels, and uncle-in-law, Frederick William I, Elector of Brandenburg. They had more power over the young Prince's affairs than she, as evidenced by his being christened Willem, and not Charles as she had desired. She was unpopular with the Dutch because of her sympathies with her own family, the Stuarts. She lived in the palace of the Stadthouder at the Binnenhof in the Hague, the building complex that now houses the Senate of the Netherlands. Her boudoir is still intact. At length, public opinion having been further angered by the hospitality that she showed to her brothers, the exiled Charles II and the Duke of York (later James II), she was forbidden to receive her relatives. Her moral reputation was damaged by rumours that she was having an affair with (or had been secretly married to) Henry Jermyn, 1st Baron Dover, a member of her brother James' household. The rumours were probably untrue, but Charles II took them seriously, and tried to prevent any further contact between Jermyn and Mary. From 1654 to 1657, the princess was usually not in Holland. In 1657, she became regent on behalf of her son for the principality of Orange, but the difficulties of her position led her to implore the assistance of her first cousin Louis XIV of France.

The restoration of Charles II in England and Scotland greatly enhanced the position of the Princess of Orange and her son in Holland. In September 1660, she returned to England. She died of smallpox on 24 December 1660, at Whitehall Palace, London and was buried in Westminster Abbey.

All content from Kiddle encyclopedia articles (including the article images and facts) can be freely used under Attribution-ShareAlike license, unless stated otherwise. Cite this article:
Mary, Princess Royal and Princess of Orange Facts for Kids. Kiddle Encyclopedia.