Sophie of Mecklenburg-Güstrow facts for kids 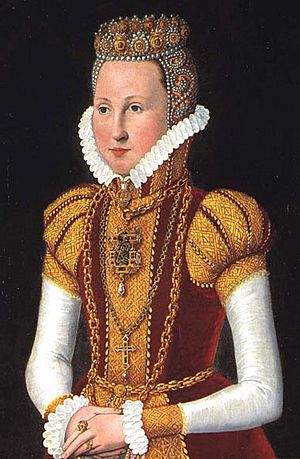 Sophie of Mecklenburg-Güstrow (4 September 1557, Wismar – 14 October 1631, Nykoping) was a German queen of Denmark and Norway. She was the mother of King Christian IV of Denmark and Anne of Denmark.

She was the daughter of Duke Ulrich III of Mecklenburg-Güstrow and Princess Elizabeth of Denmark (a daughter of Frederick I and Sophie of Pomerania). Sophie married her cousin, Frederick II of Denmark, when she was 14. He was 37. The marriage was arranged by the Danish Council, who wished the King to marry. Though their ages were very different, their marriage was usually quiet and even happy. Queen Sophie was a loving mother, nursing her children herself when they were ill. Because her husband drank lots of wine and led an unfaithful life, she sent her three oldest children to live with her parents in Güstrow when they were young. She showed a great interest in science and visited the astronomer Tycho Brahe. She was also interested in the old songs of folklore. Her daughter, Anne of Denmark, would marry James VI of Scotland and become Queen Consort in 1589. She arranged the marriage against the will of the Council.

All content from Kiddle encyclopedia articles (including the article images and facts) can be freely used under Attribution-ShareAlike license, unless stated otherwise. Cite this article:
Sophie of Mecklenburg-Güstrow Facts for Kids. Kiddle Encyclopedia.