Princess of Orange facts for kids 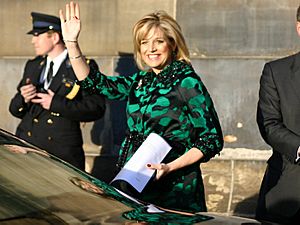 Because the title Prince of Orange was only used for 'the eldest son of the King' (the crown prince), Dutch crown princesses did not get the title. There were no "oldest sons" for a few generations, and so the title was not used since 1877. Because Dutch law was changed in 1983 to include "oldest daughters of the King", Catharina-Amalia, the next Princess of Orange became the first Dutch Princess of Orange in her own right once her father, Prince Willem-Alexander, became King of the Netherlands.

As personal and courtesy title

All content from Kiddle encyclopedia articles (including the article images and facts) can be freely used under Attribution-ShareAlike license, unless stated otherwise. Cite this article:
Princess of Orange Facts for Kids. Kiddle Encyclopedia.