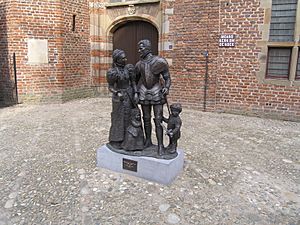 Anna van Egmont (Grave, March 1533 – Breda, 24 March 1558) was a member of an important and rich Dutch family. She was the first wife of William the Silent, Prince of Orange.

Anna died when she was only 25 years old. She was buried in Breda.

All content from Kiddle encyclopedia articles (including the article images and facts) can be freely used under Attribution-ShareAlike license, unless stated otherwise. Cite this article:
Anna van Egmont Facts for Kids. Kiddle Encyclopedia.