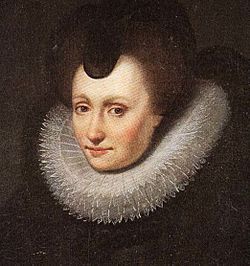 Louise de Coligny (Châtillon-sur-Loing, 23 September 1555 – Fontainebleau, 13 November 1620) was the fourth wife of Prince William the Silent. She was the daughter of an important French Protestant leader, Gaspard de Coligny.

She married Charles de Téligny when she was 16 years old in 1571. He was a Protestant diplomat who was also friendly with the French king Charles IX. Both her father and her husband were killed during the St. Bartholomew's Day massacre in 1572.

In 1583 she (27) married William the Silent in Antwerp. She became the Princess of Orange. Their son Frederik Hendrik was born on 29 January 1584. On the 10th of July that year, William was shot by catholic Balthasar Gerards and died.

She stayed in the Netherlands with her 6 stepdaughters. In 1619, she asked her stepson Maurits to stop the execution of high-placed Johan van Oldenbarnevelt, but he did not listen. She then left Holland and went to France where she (65) died in 1620. On 24 May 1621, she was buried in the crypt of the House of Orange-Nassau in the New Church in Delft.

All content from Kiddle encyclopedia articles (including the article images and facts) can be freely used under Attribution-ShareAlike license, unless stated otherwise. Cite this article:
Louise de Coligny Facts for Kids. Kiddle Encyclopedia.