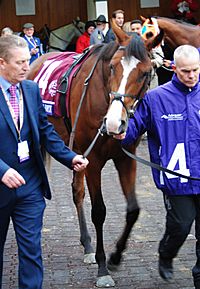 Anthony Van Dyck (19 May 2016 – 3 November 2020) was an Irish Thoroughbred racehorse. He was best known for winning the 2019 Epsom Derby. He was a top-class two-year-old in 2018 when he won three of his seven races including the Tyros Stakes and the Futurity Stakes.

He finished second in the National Stakes and third in the Dewhurst Stakes. He won the Derby Trial Stakes on his three-year-old debut before taking the Epsom Derby on 1 June.

He was placed in the Irish Derby, Irish Champion Stakes and Breeders' Cup Turf. He remained in training as a four-year-old in 2020. He was euthanised after breaking down in the 2020 Melbourne Cup on 3 November 2020 at the age of 4.

All content from Kiddle encyclopedia articles (including the article images and facts) can be freely used under Attribution-ShareAlike license, unless stated otherwise. Cite this article:
Anthony Van Dyck (horse) Facts for Kids. Kiddle Encyclopedia.