Justin Martyr (100-165 AD), also known as Saint Justin, was an early Christian from Nablus on the West Bank, who was martyred in Rome. He is known for his writings defending Christianity. He was an early Christian apologist, and is regarded as the foremost interpreter of the theory of the Logos in the 2nd century. He was martyred, alongside some of his students, and is considered a saint by the Roman Catholic Church, the Anglican Church, the Eastern Orthodox Church, and the Oriental Orthodox Churches.

Most of his works are lost, but two apologies and a dialogue did survive. The First Apology, his most well known text, passionately defends the morality of the Christian life, and provides various ethical and philosophical arguments to convince the Roman emperor, Antoninus, to abandon the persecution of the new sect. Further, he also indicates, as St Augustine did regarding the "true religion" that predated Christianity, that the "seeds of Christianity" actually predated Christ's incarnation. 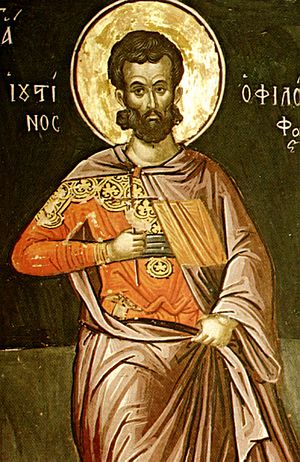 Most of what is known about the life of Justin Martyr comes from his own writings. He was born at Flavia Neapolis (in Old Testament times Shechem, now Nablus) in Palestine. The city had been founded by Vespasian in the aftermath of the destruction of Jerusalem in AD 70. Justin suffered martyrdom at Rome under Marcus Aurelius when Rusticus was prefect of the city (between 162 and 168).

He called himself a Samaritan, but his father and grandfather were probably Greek or Roman, and he was brought up a pagan. It seems that he had property, studied philosophy, converted to Christianity, and devoted the rest of his life to teaching what he considered the true philosophy, still wearing his philosopher's gown to indicate that he had attained to the truth. He probably travelled widely and ultimately settled in Rome as a Christian teacher.

All content from Kiddle encyclopedia articles (including the article images and facts) can be freely used under Attribution-ShareAlike license, unless stated otherwise. Cite this article:
Justin Martyr Facts for Kids. Kiddle Encyclopedia.