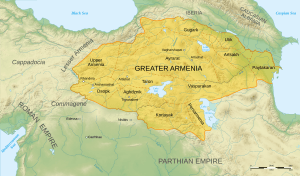 Kingdom of Armenia under the Arshakuni Dynasty, 150

The Arsacid Dynasty or (sometimes called the Arshakuni Dynasty) ruled the Kingdom of Armenia from 54 to 428. They started as a branch of the Parthian Arsacids but became a distinctly Armenian dynasty later on. Armenia was between the Parthian and Roman Empires and both were trying to control it. Arsacid Kings reigned intermittently throughout the chaotic years after the fall of the Artaxiad Dynasty until 62 when Tiridates I of Armenia secured Arsacid rule in Armenia.

An independent line of Kings was established by Vologases II of Armenia (Valarses/Vagharshak) in 180. Two of the most notable events under Arsacid rule in Armenian history were the conversion of Armenia to Christianity by St. Gregory the Illuminator in 301 and the creation of the Armenian alphabet by Mesrop Mashtots in 405.

All content from Kiddle encyclopedia articles (including the article images and facts) can be freely used under Attribution-ShareAlike license, unless stated otherwise. Cite this article:
Arsacid Dynasty of Armenia Facts for Kids. Kiddle Encyclopedia.