Sabah al-Ahmad al-Jaber al-Sabah (Arabic: الشيخ صباح الأحمد الجابر الصباح‎; 16 June 1929 – 29 September 2020) was the Emir of Kuwait and the Commander of the Kuwait Military Forces. He was sworn in on 29 January 2006 after confirmation by the National Assembly and served until his death on 29 September 2020. He was the fourth son of Sheikh Ahmad Al-Jaber Al-Sabah.

Al-Sabah was born on 16 June 1929. He received his primary education at Al Mubarakya School in the 1930s and completed his education under tutors. He was the half-brother of the previous Emir of Kuwait, Sheikh Jaber Al-Ahmad Al-Sabah, who appointed Sabah as Prime Minister in July 2003, replacing the Crown Prince of Kuwait, Sheikh Saad Al-Salim Al-Sabah. His brother was killed in the deliberate crash of Royal Air Maroc Flight 630. 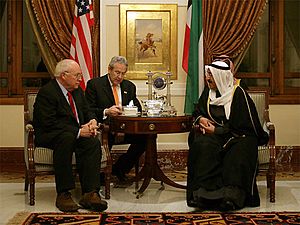 U.S. Vice President Dick Cheney meets with Prime Minister Sheikh Sabah to deliver condolences on the death of the Emir in 2006.

On 15 January 2006, the Emir, Sheikh Jaber, died, making Sheikh Saad, Crown Prince of Kuwait, the new Emir. With Saad's accession, Sabah was likely to become the new Crown Prince, retaining his function of Prime Minister. But the Constitution requires that the Emir be sworn in before Parliament, and the oath of office is complex. Soon, word began to spread that Saad was unable to take the oath in full. Some reports suggested that he suffered from Alzheimer's disease or some other debilitating disease; it was generally agreed that he was unable to speak, at least at any length. After a power struggle within the ruling family, Saad agreed to abdicate as Emir of Kuwait on 23 January 2006 due to his illness. The ruling family then conferred and Sabah became the new Emir. On 24 January 2006, the National Assembly of Kuwait voted Saad out of office, moments before an official letter of abdication was received. The Cabinet of Kuwait nominated Sabah as Emir. He was sworn in on 29 January 2006 with the National Assembly's approval, ending that crisis.

Dissolution of the National Assembly

Sabah at the 13. Session of the Islamic Summit Conference in Istanbul 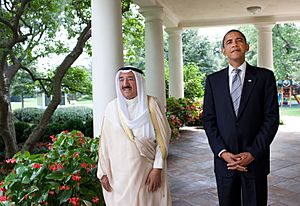 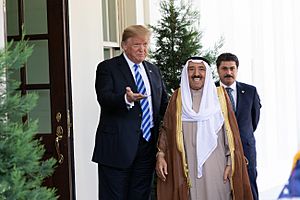 Sabah was a respected regional and international mediator due in part to his place in the Gulf Cooperation Council's leadership order and his 40 years of service as Foreign Minister and Prime Minister. Under his leadership, Kuwait acted as a go-between for Pakistan and Bangladesh, Turkey and Bulgaria, the Palestinian Authority and Jordan, factions in the civil war in Lebanon, and the Gulf States and Iran. In 2016 Sabah hosted several United Nations sponsored meetings of leaders from the warring factions in the Yemeni Civil War.

Sabah quickly established Kuwait as the key mediator in the Qatar diplomatic crisis, meeting with Saudi and Emirati officials on 6–7 June before leaving for Doha to discuss the rift with Qatari leaders. His ongoing efforts have been publicly supported by Qatar and other interested parties from the region as well as the U.S., UK, France, and Germany. At the beginning of September 2017, Sabah discussed the situation with top officials in Washington, D.C., including U.S. President Donald Trump, who "hailed his efforts" to mediate and "applauded Kuwait's 'critical contributions to regional stability'". There were some questions from the boycotting countries about any preconditions. French President Emmanuel Macron stated French support for Sabah's mediation efforts after a meeting in Paris on 15 September 2017, reiterating June 2017 statements of support for the initiative. Trump and Sabah had a third meeting at the White House on 5 September 2018.

Former U.S. President Jimmy Carter called Sabah a "global humanitarian leader", saying, "His support of disaster relief, peace efforts and advancing public health are an inspiration. Other world leaders can learn from the wise example set by my friend, His Highness the Emir."

According to the 2014 Middle East Coutts Report, Sabah provided the largest individual donation in 2013 among GCC members in support of Syrian refugees in neighboring countries, $300 million. Also in 2014, United Nations Secretary-General Ban Ki-moon cited Sabah as a humanitarian leader globally and presented him with a Humanitarian Award. Ban said, "It gives me great pleasure and honour to be here today to recognize the leadership of His Highness Sheikh Sabah Al Ahmad Al Jaber al Sabah, Emir of Kuwait. This is a great humanitarian day. We are sitting together with a great humanitarian leader of our world".

In 2015, Sabah pledged $500 million toward easing the Syrian humanitarian crisis at the UN Summit convened in Kuwait.

After months of hospitalization at the Mayo Clinic in Rochester, Minnesota, Al-Sabah died on 29 September 2020 at 08:00 CDT (16:00 Kuwaiti Time) at the age of 91 due to long-term health issues. The Kuwait government declared 40 days of mourning. Kuwaiti Television and Radio broke normal programming on that day and broadcast Recitation of the Qur'anic Verses before Sheikh Ali Al-Jarrah Al-Sabah, Minister of the Amiri Diwani Affairs, appeared at 16:48, formally announcing the Emir's passing. Sheikh Sabah's half brother the crown prince of Kuwait Sheikh Nawaf was announced as the Emir of Kuwait. He was buried at Sulaibikhat cemetery alongside his kin.

All content from Kiddle encyclopedia articles (including the article images and facts) can be freely used under Attribution-ShareAlike license, unless stated otherwise. Cite this article:
Sabah Al-Ahmad Al-Jaber Al-Sabah Facts for Kids. Kiddle Encyclopedia.