Sabah Al Khalid Al Sabah (Arabic: الشيخ صباح الخالد الحمد الصباح; born 3 March 1953) is a Kuwaiti diplomat and politician who served as the Prime Minister of Kuwait from 2019 to 2022. he served in different governmental posts from 2006 until 2019. He is a senior member of the ruling Al Sabah family.

He holds a bachelor's degree in political sciences which he received from Kuwait University in 1977. 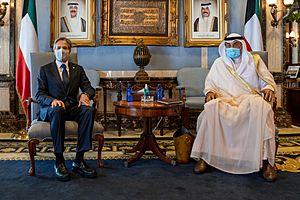 Sabah started his career in 1978, joining the ministry of foreign affairs. Until 1995 he worked at the ministry in various capacities, including being a member of Kuwait's permanent mission to the United Nations (1983–1989). In 1995, he became Kuwait's ambassador to Saudi Arabia and served in the post until 1998. During this period he was also Kuwait's envoy to the Organization of the Islamic Conference (OIC). From 1998 to 2006 he was the chief of the national security.

On 22 October 2011, he became both deputy prime minister and minister of foreign affairs. Sabah replaced Mohammad Al Sabah as foreign minister. In a reshuffle of 14 December 2011 Sabah was also appointed minister of state for cabinet affairs. Later this post was assumed by Mohammad Abdullah Al Mubarak Al Sabah. On 4 August 2013, Sabah was made first deputy prime minister in addition to his post as foreign minister.

On 19 November 2019, Sabah became the 8th prime minister of Kuwait through Emiri decree after the resignation of his predecessor Jaber Al-Mubarak Al-Hamad Al-Sabah. In May 2021, Sabah spoke in favor of a new Kuwaiti law requiring 10 years imprisonment and a fine of 5,000 Kuwaiti Dinar for anyone supporting Israel in real life or on social media. He submitted his cabinet's resignation on 5 April 2022, which the emir accepted on 10 May 2022 with a request to remain in a caretaker capacity.

All content from Kiddle encyclopedia articles (including the article images and facts) can be freely used under Attribution-ShareAlike license, unless stated otherwise. Cite this article:
Sabah Al-Khalid Al-Sabah Facts for Kids. Kiddle Encyclopedia.