House of Lorraine facts for kids 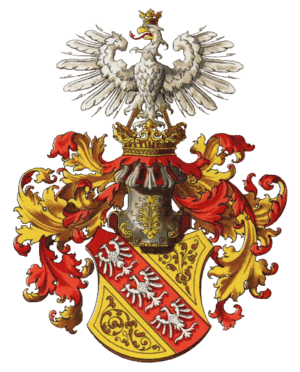 The arms of the house of Lorraine.

The House of Lorraine, the main and now only remaining line known as Habsburg-Lorraine, is one of the most important and was one of the longest-reigning royal houses in the history of Europe.[1] Currently the house is headed by Karl Habsburg-Lothringen, the titular Emperor of Austria, King of Hungary, Bohemia, Galicia and Lodomeria, Croatia, Illyria, as well as the titular King of Jerusalem.

All content from Kiddle encyclopedia articles (including the article images and facts) can be freely used under Attribution-ShareAlike license, unless stated otherwise. Cite this article:
House of Lorraine Facts for Kids. Kiddle Encyclopedia.