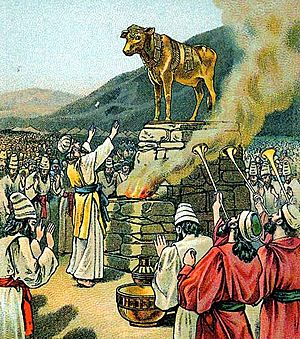 Idolatry is the worship of statues or images as a god. It is also used as a metaphor for other extreme devotion to a person of thing.

Idolatry as a Metaphor

Religious leaders have used the idea of Idolatry (literal worship of statues or images) as a metaphor. They call anything that comes ahead of God an Idol. Saint Paul writes that "covetousness" (wanting material things) is idolatry. Jesus preached that "you cannot serve God and Mammon". Mammon was the Syrian God of riches. Muslim writers warn of making idols of material things or even political ideologies. Eastern religions have also warned about making material things one's god.

"Idolizing" persons, such as rock stars can also be seen as a form of idolatry. The popular TV show "American Idol" seems to use the term in a positive way. But this has been questioned even by non religious persons. Billy Graham has warned against various things that become idols in a person's life.

All content from Kiddle encyclopedia articles (including the article images and facts) can be freely used under Attribution-ShareAlike license, unless stated otherwise. Cite this article:
Idolatry Facts for Kids. Kiddle Encyclopedia.