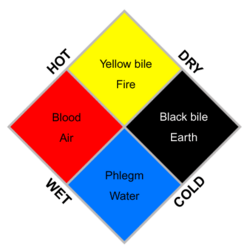 Humorism, or humoralism, was a system of medicine about the makeup and workings of the human body. It was a belief that too much or too little of any of four distinct body fluids in a person directly influenced their temperament and health. The humoralist system of medicine is highly individualistic. Each individual patient was made up of their own unique combination of humors.

It resembled an early holistic approach to medicine linking mental and physical processes. From Hippocrates onward, the humoral theory was adopted by Greek, Roman and Persian physicians. It became the most commonly held view of the human body among early physicians until the coming of modern medical research in the nineteenth century. It has not been used in medicine since then.

All content from Kiddle encyclopedia articles (including the article images and facts) can be freely used under Attribution-ShareAlike license, unless stated otherwise. Cite this article:
Humorism Facts for Kids. Kiddle Encyclopedia.