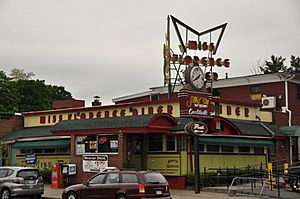 The Miss Florence Diner in Florence

Florence is a village in the northwestern portion of the city of Northampton, Hampshire County, Massachusetts.

The naming of Florence

The name "Florence" was suggested by neurologist Dr. Charles Munde, who also operated a hydropathic establishment there, named Florence Water-Cure.

From the very early days of Northampton till 1847, the locality now called Florence was known as "Broughton's Meadow." Soon after 1810 another name was applied commonly to this region, namely the "Warner School District." The Northampton Association of Education and Industry was started in 1842, and while it existed, the common term given to the settlement was "The Community." In 1848 these three names gave way to Bensonville, and when two years later Mr. Benson failed, and the old appellation became objectionable, the village was called Greenville, from the new cotton company.
In the fall of 1852 a meeting of the villagers was held in the South schoolhouse to choose a name for the place. Postal communication was soon to be established and a new name was desired. "Shepherd's Hollow" with its woolen mills, had been named "Leeds" after the city of Leeds in England, and the name of the great silk emporium of Italy was offered by Dr. Munde as a suitable appellation for this place. The pretty village, the clear stream, the silk mill, all suggested to his vivid imagination the proprietry of naming the village "Florence," and the stream "Arno." The citizens thought well of the neat and euphonious "Florence," and unanimously adopted it, but the "Arno" never replaced the historic term of "Mill River."

In 1832, Samuel Whitmarsh planted 25 acres (10 ha) of mulberry trees in Florence in order to raise silkworms. Later, Whitmarsh's silk mill (in nearby Leeds, Massachusetts) was briefly run as a communal project by the Northampton Association of Education and Industry, a utopian community of abolitionists, who believed that the rights of all should be "equal without distinction of sex, color or condition, sect or religion."

Sojourner Truth, a former slave who became a nationally known advocate for equality and justice, was a member of this community. (She had moved to Florence in 1843.) After the community dissolved in 1846, she bought a house on Park Street, where she lived until 1857. A memorial statue was erected in her honor in Florence in 2002.

Samuel L. Hill, the spiritual leader of the Northampton Association of Education and Industry, invented a machine that could spin silk smooth enough to be used in sewing machines. After the commune dissolved, Hill took over the factory and ran it as the Nonotuck Silk Company. Hill's home at 31-35 Maple Street in Florence served as a stop for the Underground Railway. The company changed its name again, and, as the Corticelli Silk Company, grew to be one of the world's largest producers of silk thread, made with raw silk imported from Japan. In New York City, the Corticelli logo—a kitten playing with a spool of thread—loomed over Broadway from a huge electrical sign at 42nd Street between 1910 and 1913 [1]. The company went out of business in 1930.

David Ruggles was an "African-American printer in New York City during the 1830s", who "was the prototype for black activist journalists of his time". He had edited a New York paper called The Mirror. In 1841, his father died, and as he was himself ailing and almost blind, friends arranged for him to join a commune in Northampton, Massachusetts. Applying home treatment upon hydropathic principles, he regained his health to some degree, but not his eyesight. He began practicing hydropathy, and by 1845, had established a water cure hospital in the area now known as Florence. This was one of the earliest in the United States, although others, notably Joel Shew, and Russell Thatcher Trall (R.T. Trall), had preceded him.

Charles Munde emigrated from Germany. He became familiar with the water cure methods of Vincent Priessnitz around 1836, and treated scarlet fever cases in Dresden during the winter of 1845-46. From childhood recollections of one of his sons, Paul F. Munde, the family went to the area now (but not then, per Sheffeld) called Florence "in the early fifties", after his father had struggled "for nearly a year in New York in search of a practice". After the death of David Ruggles in 1849, Charles Munde learned "of the opportunity to take up his favorite method", which led him to pick up where Ruggles left off, thence to the naming of Florence, and accordingly, the name of the Florence Water Cure, also called the Munde Water Cure.

Mirage Studios, the creative force behind the Teenage Mutant Ninja Turtles comic books was based out of a renovated factory space in Florence.

Florence was the filming location for the 1999 movie, "In Dreams."

Landmarks include the Miss Florence Diner, a 1950s style diner famous for its milkshakes and pies, as well as the stores Cooper's Corner and Bird's.

Many areas of Florence have undergone renovations in the recent past, with former factories now playing host to art studios and small retail stores.

Look Park The largest park in Florence and greater Northampton, with many amenities and attractions.

All content from Kiddle encyclopedia articles (including the article images and facts) can be freely used under Attribution-ShareAlike license, unless stated otherwise. Cite this article:
Florence, Massachusetts Facts for Kids. Kiddle Encyclopedia.