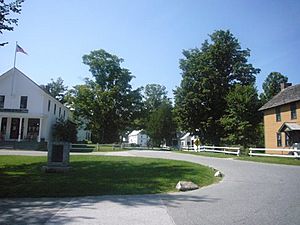 Plymouth Notch, Vermont. Coolidge was born in the rear of the general store in the foreground and the Coolidge's still operative cheese company is in the distance in the background

The home was bought by his father, John Coolidge, who expanded it from a simple 1+1⁄2-story farm house to its present size and appearance today. 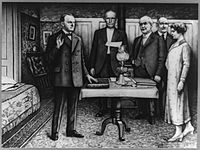 The first inauguration of Calvin Coolidge

Despite living most of his life in Northampton, Massachusetts, Calvin Coolidge often returned to the homestead to visit his family, and he was staying there when President Warren G. Harding died. Coolidge was sworn in by his father in the family parlor after taking the Oath of Office for the presidency. Due to his father's refusal to modernize the house it remains in the same condition, and in some cases with the same furnishings, as it was the night Coolidge took the oath. The Inaugural Room itself is behind glass, but a visitor can stand in an alcove and see the lamp, Bible, and table that were used in the ceremony, all placed in their historic positions.

The district was declared a National Historic Landmark in 1965.

Today, the Coolidge Homestead is part of the Calvin Coolidge State Historical Site overseen by the state of Vermont. As far as possible the buildings have been returned to the conditions they were in when Coolidge was president. A simple video and picture display of his life is shown in the barn. The rooms in Coolidge Hall that he used as a Summer White House in 1924 have been restored and a video of contemporary newsreel film added.

It is located west and north of Vermont Route 100A in Plymouth Notch, and open daily from 9:30 A.M. to 5:00 P.M, late May to mid-October. Four generations of the family, including the President, are buried in nearby Plymouth Notch Cemetery. The Calvin Coolidge State Park, a developed part of the Coolidge State Forest, is also close by.

All content from Kiddle encyclopedia articles (including the article images and facts) can be freely used under Attribution-ShareAlike license, unless stated otherwise. Cite this article:
Coolidge Homestead Facts for Kids. Kiddle Encyclopedia.