Kids Encyclopedia Facts
This page is about the Scottish town. For other uses, see Stornoway (disambiguation).

Stornoway ( Scottish Gaelic: Steòrnabhagh) is a town on the Isle of Lewis, in the Outer Hebrides (also known as the Western Isles) of Scotland.

The town's population is around 8,000, making it the largest town in the Hebrides, with a third of the population of the civil parish of Stornoway, which includes various nearby villages and has a population of approximately 12,000. Stornoway is an important port and the major town and administrative centre of the Outer Hebrides. It is home to Comhairle nan Eilean Siar (the Western Isles Council) and a variety of educational, sporting and media establishments. Observance of the Christian Sabbath (Sunday) has long been an aspect of the island's culture. Recent changes mean that Sunday on Lewis is now less different from Sunday on the other Western Isles or the mainland of Scotland.

According to the 2011 Census, there are 5,492 Scottish Gaelic speakers (43%) in the greater Stornoway area.

The town was founded by Vikings in the early 9th century, under the Old Norse name Stjórnavágr. This town, and what eventually became its present-day version, grew up around a sheltered natural harbour well placed at a central point on the island, for the convenience of people from all over the island, to arrive at the port of Stornoway, either by family boat or by horse-drawn coach for ongoing travel and trade with the mainland of Scotland and to all points south.

At some point in the mid 1500s, the already ancient MacLeod castle in Stornoway 'fell victim to the cannons of the Duke of Argyle'. By the early 1600s rumbling trade wars came to a head and all further government attempts to curtail traditional shipping rights were firmly resisted by the islanders, as was an attempt by the King of Scotland James VI to place in the island the Scottish trading company known as the Fife Adventurers around 1598.

In the mid 19th century, the ownership of Stornoway - and by extension the Isle of Lewis - passed from the MacKenzies of Seaforth to Sir James Matheson (and his descendants) who built the present Stornoway castle on a hill overlooking the bay of Stornoway. Matheson sold the island to William Lever, 1st Viscount Leverhulme.

Lord Leverhulme held the island for a short time. His economic plans for the island (and with diverse business setbacks looming) over-stretched his finances and faced with failure in Lewis, he gave Stornoway parish to the people of the town. The Stornoway Trust was formed and continues to administer the parish for the people. 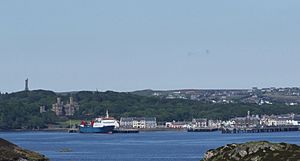 Today the harbour hosts a fishing fleet (and associated shoreside services) somewhat reduced from its heyday, a small marina and moorings for pleasure craft, a small shipyard and slipway, three larger piers for commercial traffic and Stornoway Lifeboat Station, run by the RNLI and home to a Severn-class lifeboat, Tom Sanderson. Her Majesty's Coastguard operates a Maritime Rescue Sub Centre from a building near the harbour.

A lighthouse, seaweed processing plant and a renewable energy manufacturing yard are situated on Arnish Point at the mouth of the harbour and visually dominate the approaches. Arnish Point is also earmarked by AMEC as the landfall for its proposed private sub-sea cable which would export the electricity generated from the Lewis Windpower wind farm with a planning application for 181 turbines submitted to the Scottish Executive. In 2008 the Scottish Government rejected the plans - the company responsible is currently planning their next move.

The Arnish area was also surveyed by SSE for a second sub-sea cable but lost out in favour of Gravir to the south as the preferred site. SSE prefers Arnish Point as of 2016. The manufacturing yard was originally established in the 1970s as a fabrication plant for the oil industry but suffered regular boom and bust cycles. The downturn in business from the North Sea oil industry in recent years led to a move away from serving this market. The yard is now earmarked as a key business in the development of the whole Arnish Point industrial estate and has received large amounts of funding in recent years.

In 2007 the Arnish yard was taken over by its third tenant in as many years. Cambrian Engineering fell into liquidation as did Aberdeen-owned Camcal Ltd with relatively large-scale redundancies. Both firms were affected by the absence of a regular stream of orders and left a chain of large debts impacting upon local suppliers. Altissimo Ltd is a new firm backed by a group of Swiss and Dutch investors, and has purchased the Camcal name from the previous operator. In December 2007, the yard won a contract to construct 49 towers for wind turbines in Turkey. This will ensure employment for around 70 employees for over six months.

On 1 January 1919, the Iolaire sank at the entrance of the harbour, one of the worst maritime disasters in Scottish or UK waters, with a death toll of 205 men, who were returning home from World War I.

Stornoway, like much of the British Isles, has an Oceanic climate, with relatively little variation of temperature and damp conditions throughout the year. 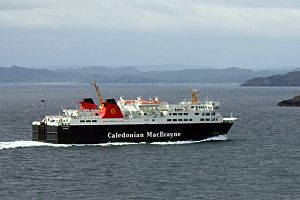 The Caledonian MacBrayne-operated ferry MV Loch Seaforth has been sailing since 2015 and sails from the harbour to Ullapool on the Scottish mainland, taking 2 hours 30 minutes. There are an average of two return crossings a day, with an increase and reduction in frequency in summer and winter months respectively. The former main ship on the route, MV Isle of Lewis (1995), provides a back-up to Loch Seaforth when there is more traffic and when she is unable to sail.

Suggestions for the possibility of an undersea tunnel linking Lewis and Harris to the Scottish mainland were raised in early 2007. One of the possible routes, between Stornoway and Ullapool, would be over 40 miles (60 km) long and hence become the longest road tunnel in the world.

Stornoway is also the public transport hub of Lewis, and buses run to Point, Ness, Back and Tolsta, Uig, the West Side, Lochs and Tarbert, Harris. These buses are provided by the Comhairle and several private operators as well as some community-run organisations.

Stornoway Airport is located next to the village of Melbost, 2 miles (3 km) away from the town itself. From here services operate to Aberdeen, Benbecula, Edinburgh, Inverness and Glasgow, with flights from Flybe franchisee Loganair & Eastern Airways. The airport is also the base of an HM Coastguard Search & Rescue Sikorsky S-92 helicopter, and was previously home to RAF Stornoway. In 1898, the Hebridean Light Railway Company was proposed, with a terminus at Stornoway, but the line was never constructed.

The annual Hebridean Celtic Festival is a 4-day community-led festival which attracts over 10,000 visitors during July of each year. The Royal National Mòd has been held in Stornoway on a number of occasions, most recently in 2005, 2011 and 2016. Large influxes of visitors such as for these events can strain the town's accommodation capacity.

The radio station Isles FM is based in Stornoway and broadcasts on 103FM, featuring a mixture of Gaelic and English programming. It is also home to a studio operated by BBC Radio nan Gàidheal. The Gaelic-language public service broadcaster BBC Alba launched on 19 September 2008, is based in Stornoway.

The main local newspaper for the Western Isles is the Stornoway Gazette.

Stornoway black pudding is a gourmet black pudding, and was granted PGI status in 2013 by the European Commission to prevent inferior puddings produced elsewhere being marketed as "Stornoway" or "Stornoway Style".

Stornoway kippers and Stornoway smoked salmon are produced in town. They have one of the last working brick kilns in the UK, at the establishment of Stornoway Fish Smokers, Shell Street. 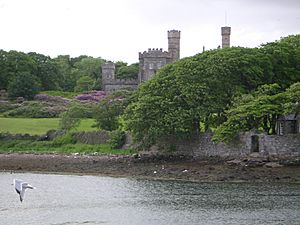 Notable buildings in Stornoway include:

Stornoway in popular media and culture 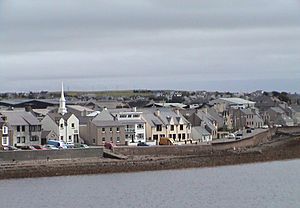 The 4AD Records folk-rock band Stornoway took their name from the town, after seeing it on the BBC weather report. They signed their record deal outside the Woodlands Centre in Lews Castle Grounds, Stornoway, after performing in the town for the first time in April 2010. Their second concert there was as headliners on the main stage of the Hebridean Celtic Festival on 13 July 2011.

"Stornoway" is the name of the official residence of the Leader of the Opposition in Canada's Parliament. It was given the name by its second occupants, the Perley-Robertsons, after the ancestral home of the Perley family.

The novel The Stornoway Way by Lewisman Kevin MacNeil is largely set in Stornoway.

RAF Stornoway is featured in the Tom Clancy novel Red Storm Rising as a base for Allied air operations over the North Atlantic and against Soviet-held Iceland.

Stornoway features heavily in the initial stages of the X-Men comics Dark Phoenix Saga due to its proximity to the fictional Muir Island and Proteus' attempts to find a new host body.

In the motion picture Latitude Zero by Toho Productions (1969), Stornoway Harbour is featured on a wall plaque as the construction site of the submarine "Alpha".

In 2007 the British car manufacturer Land Rover introduced Stornoway Grey as a colour choice for its vehicle line-up. In response, Stornoway's councillor Angus Nicolson appealed to Land Rover to relabel the colour as Silvery Stornoway, fearing that the association of grey with dull and boring would hurt the image of the town with tourists; Mr Nicolson said: "This is deeply insulting and is offensive, inaccurate and inherently degrading. This will hit tourism as it subliminally implants adverse connotations in the minds of those who have never experienced the reality of these beautiful islands." Land Rover replied that the colour in question is one of the most popular ones and the use of Stornoway in its name will instead "keep it on the map".

In 2011 Scottish author Peter May published The Blackhouse, the first of The Lewis Trilogy of thrillers based on Lewis, where the primary police murder investigation is based in Stornoway.

Stornoway has several churches of various Christian denominations, and is a stronghold of the Free Church of Scotland. The Sabbath is still widely observed in Stornoway; it is home to a number of members of the Lord's Day Observance Society, which lobbies for no work on the Christian Sabbath (Sundays), based on its interpretation of the fourth (by the Hebrew reckoning) of the Ten Commandments. Sunday newspapers are not available and almost all shops and local amenities are closed on Sundays.

Until July 2009, there were no Sunday ferry services to or from Stornoway. It was announced on 14 July 2009 that Caledonian MacBrayne would begin to operate Sunday sailings from Sunday 19 July 2009. Before this, they would operate additional sailings on Sundays if several previous sailings have been cancelled, to allow the backlog of traffic to clear. Caledonian MacBrayne have said that they took legal advice that not implementing Sunday sailings would be against human rights legislation.

There are Sunday flights leaving from Stornoway airport with two return flights to Inverness and one to Glasgow.

Areas of the town

All content from Kiddle encyclopedia articles (including the article images and facts) can be freely used under Attribution-ShareAlike license, unless stated otherwise. Cite this article:
Stornoway Facts for Kids. Kiddle Encyclopedia.