Caltha palustris, known as marsh-marigold and kingcup, is a small to medium size perennial herbaceous plant of the buttercup family, native to marshes, fens, ditches and wet woodland in temperate regions of the Northern Hemisphere. It flowers between April and August, dependent on altitude and latitude, but occasional flowers may occur at other times.

Caltha palustris is a 10–80 cm high, hairless, fleshy, perennial, herbaceous plant, that dies down in autumn and overwinters with buds near the surface of the marshy soil. The plants have many, 2–3 mm thick strongly branching roots. Its flowering stems are hollow, erect or more or less decumbent. The alternate true leaves are in a rosette, each of which consist of a leaf stem that is about 4× as long as the kidney-shaped leaf blade, itself between 3–25 cm long and 3–20 cm wide, with a heart-shaped foot, a blunt tip, and a scalloped to toothed, sometime almost entire margin particularly towards the tip. In their youth the leaves are protected by a membranous sheath, that may be up to 3 cm long in fully grown plants.

The common marsh-marigold mostly has several flowering stems of up to 80 cm long, carrying – mostly several – seated leaflike stipules – or the lower ones may be on a short petiole -, and between four and six (but occasionally as few as one or as many as twenty five) flowers. The flowers are approximately 4 (2–5½) cm in diameter. There are four to nine (mostly five) petal-like, brightly colored – yolk yellow, white or magenta -, inverted egg-shaped sepals, each about 1¾ (1–2½) cm long and 1⅓ (¾–1¾) cm wide with a blunt or sometimes acute tip. Real petals and nectaries are lacking. Between fifty and hundred-twenty stamens with flattened yellow filaments and yellow tricolpate or sometimes pantoporate pollen encircle between five and twenty-five free, flattened, linear-oblong, yellow to green carpels, with a two-lobed, obliquely positioned stigma, and each with many seedbuds. This later on develops into a seated, funnel-shaped fruit (a so-called follicle) of ¾–2 cm long and ¼–½ cm wide, that opens with one suture at the side of the axis and contains seven to twenty ovoid, brown to black seeds of about 2½×1⅓ mm.

The oldest description that is generally acknowledged in the botanical literature dates from 1700 under the name Populago by Joseph Pitton de Tournefort in part 1 of his Institutiones rei herbariae. He distinguished between P. flore major, P. flore minor and P. flore plena, and already says all of these are synonymous to Caltha palustris, without mentioning any previous author. As a plant name published before 1 May 1753, Populago Tourn. is invalid. And so is the first description as Caltha palustris by Carl Linnaeus in his Genera Plantarum of 1737. But Linnaeus re-describes the species under the same name in Species Plantarum of 1 May 1753, thus providing the correct name. 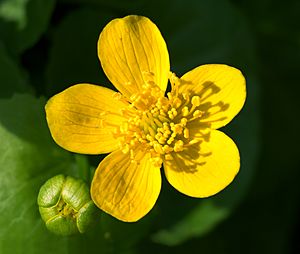 The generic name Caltha is derived from the Ancient Greek κάλαθος (kálathos), meaning "goblet", and is said to refer to the shape of the flower. The species epithet palustris is Latin for "of the marsh" and indicates its common habitat.

In the UK, Caltha palustris is known by a variety of vernacular names, varying by geographical region. These include in addition to the most common two, marsh marigold and kingcup, also brave bassinets, crazy Beth, horse blob, Molly-blob, May blob, mare blob, boots, water boots, meadow-bright, bullflower, meadow buttercup, water buttercup, soldier's buttons, meadow cowslip, water cowslip, publican's cloak, crowfoot, water dragon, drunkards, water goggles, meadow gowan, water gowan, yellow gowan, goldes, golds, goldings, gools, cow lily, marybuds, and publicans-and-sinners. The common name "marigold" refers to its use in medieval churches at Easter as a tribute to the Virgin Mary, as in "Mary gold". In North America Caltha palustris is sometimes known as cowslip. However, cowslip more often refers to Primula veris, the original plant to go by that name. Both are herbaceous plants with yellow flowers, but Primula veris is much smaller.

Caltha palustris is a plant commonly mentioned in literature, including Shakespeare:

They both halted on the green brow of the Common: they looked down on the deep valley robed in May raiment; on varied meads, some pearled with daisies, and some golden with king-cups: to-day all this young verdure smiled clear in sunlight; transparent emerald and amber gleams played over it

and in Thomas Hardy's poem 'Overlooking the River Stour':

Kingcup Cottage by Racey Helps is a children's book which features the plant.

In Latvia Caltha palustris is also known as gundega, which is also used as a girls name and symbolizes fire. The word gundega is made from 2 words – uguns ("fire") and dega ("burned"). This refers to the burning reaction that some people experience from contact with Caltha sap. 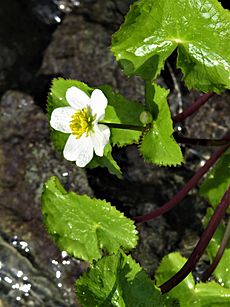 White form seen in the Hiamalayas in Kashmir, India

Caltha palustris is a very variable species. Since most character states occur in almost any combination, this provides little basis for subdivisions. The following varieties are nevertheless widely recognised. They are listed with their respective synonyms. If an epithet based on the same type specimen is used at different levels, only the use at the highest taxonomic rank is listed, so as C. himalensis is already listed, C. palustris var. himalensis is not. 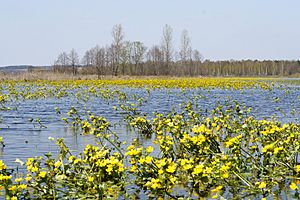 The marsh-marigold on spring flood plains of the Narew river.

The marsh-marigold grows in places with oxygen-rich water near the surface of the soil. It likes richer soils, but dislikes application of fertilizer and avoids high concentrations of phosphate and ammonium, and is also shy of brackish water. It is often associated with seepage that is rich in iron, because iron ions react with phosphate, thus making it unavailable for plants. The resulting insoluble mineral appears as "rusty" flocs on the water soil and the surface of the stems of marsh plants. Around the edge of lakes and rivers it grows between reeds, and it can be found in black alder coppices and other regularly flooded and always moist forests. When it is present it often visually dominates when it is in bloom. It also used to be common on wet meadows, but due to agricultural rationalization it is now limited to ditches.

It is a component of Purple moor grass and rush pastures – a type of Biodiversity Action Plan habitat in the UK. It occurs on poorly drained neutral and acidic soils of the lowlands and upland fringe.

In western Europe, the marsh-marigold moth Micropterix calthella bites open the anthers of the marsh-marigold and other plants to eat the pollen. The caterpillars that are present in summer and autumn also feed on marsh-marigold, although these are sometimes found on mosses too. Another visitor of Caltha palustris in western Europe is the leaf beetle Prasocuris phellandrii, which is black with four orange stripes and around ½ cm and eats the sepals. Its larvae inhabit the hollow stems of members of the parsley family. In the USA (Illinois) two species of leaf beetle can be found on Caltha: Plateumaris nitida and Hydrothassa vittata. The maggots of some Phytomyza species (Agromyzidae) are miners in Caltha leaves. 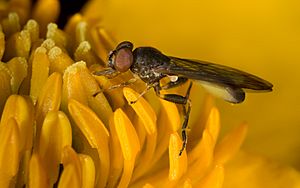 Flowers produce both nectar and copious amounts of pollen which attract many insect visitors. They may be most commonly pollinated by hoverflies (Syrphidae). In Canada, beetles (Cantharidae, Nitidulidae, Coccinellidae, Chrysomelidae, Cerambycidae), thrips (Thripidae), bugs (Miridae), butterflies (Pieridae), sawflies (Tenthredinidae), bees (Apidae, Halictidae, Andrenidae), ants (Formicidae) and flies (Sepsidae, Sciomyzidae, Ephydridae, Syrphidae, Anthomyiidae, Tachinidae and Muscidae) have been observed to visit the leaves or flowers, many of which were found carrying Caltha pollen.

In addition to other forms of pollination, this plant is adapted to rain-pollination.

Caltha palustris is infertile when self-pollinated. Rather high fertility in crosses between sibling plants suggest that this phenomenon is genetically regulated by several genes. This regulation mechanism also occurs in Ranunculus and as far as known only in these two genera.

In Caltha palustris up to two hundred seeds may be produced by each flower. When the follicles open, they form a "splash cup". When a raindrop hits one at the right angle, the walls are shaped such that the seeds are expelled. The seeds also have some spongy tissue that makes them float on water, until they wash up in a location that may be suitable for this species to grow.

Early spring greens and buds of Caltha palustris are edible when cooked (but are poisonous when raw). Young leaves or buds should be submerged a few times in fresh boiling water until barely tender, cut into bite-sized pieces, lightly salted, and served with melted butter and vinegar. Very young flowerbuds have been prepared like capers and used as a spice.

The common marsh marigold is planted as an ornamental throughout temperate regions in the world, and sometimes recommended for low maintenance wildlife gardens. The double-flowered cultivar 'Flore Pleno' has won the Royal Horticultural Society's Award of Garden Merit.

Caltha contains several active substances of which the most important from a toxicological point of view is protoanemonin. Larger quantities of the plant may cause convulsions, burning of the throat, vomiting, bloody diarrhea, dizziness and fainting. Contact of the skin or mucous membranes with the juices can cause blistering or inflammation, and gastric illness if ingested. Younger parts seem to contain less toxics and heating breaks these substances down. Small amounts of Caltha in hay do not cause problems when fed to husbandry, but larger quantities lead to gastric illness.

All content from Kiddle encyclopedia articles (including the article images and facts) can be freely used under Attribution-ShareAlike license, unless stated otherwise. Cite this article:
Caltha palustris Facts for Kids. Kiddle Encyclopedia.