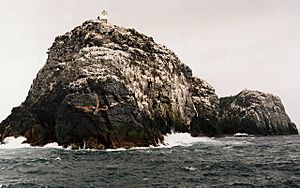 Sula Sgeir from the South West.

Sula Sgeir is a small, uninhabited Scottish island in the North Atlantic. One of the most remote of the British Isles. The island is inhospitable to humans. There is a ruined stone house called Taigh Beannaichte (Blessed House) on the east headland Sgeir an Teampall, the island is formed by pieces of rocks, where are often hard to walk on. Sula Sgeir is a National Nature Reserve since 1956. It is an important place for birds.

The most famous part of island are the caves, which can be explored.

There are 5,000 breeding pairs of gannets on Sula Sgeir, which they share with other bird species such as Black-legged Kittiwakes, guillemots, puffins and fulmars.

All content from Kiddle encyclopedia articles (including the article images and facts) can be freely used under Attribution-ShareAlike license, unless stated otherwise. Cite this article:
Sula Sgeir Facts for Kids. Kiddle Encyclopedia.