John Newton (4 August|1725 – 21 December 1807) was an English Anglican clergyman who served as a sailor in the Royal Navy for a period, and later as the captain of slave ships. He became ordained as an evangelical Anglican cleric, served Olney, Buckinghamshire for two decades, and also wrote hymns, known for "Amazing Grace" and "Glorious Things of Thee Are Spoken".

Newton started his career at sea at a young age, and worked on slave ships in the slave trade for several years. After experiencing a period of Christian conversion Newton eventually renounced his trade and became a prominent supporter of abolitionism, living to see Britain's abolition of the African slave trade in 1807. 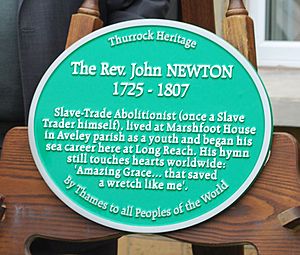 John Newton was born in Wapping, London, in 1725, the son of John Newton Sr., a shipmaster in the Mediterranean service, and Elizabeth (née Scatliff), he died of tuberculosis (then called consumption) in July 1732, about two weeks before John’s seventh birthday. Newton spent two years at boarding school before going to live in Aveley in Essex, the home of his father's new wife.

At age eleven he first went to sea with his father. Newton sailed six voyages before his father retired in 1742. At that time, Newton’s father made plans for him to work at a sugarcane plantation in Jamaica. Instead, Newton signed on with a merchant ship sailing to the Mediterranean Sea.

In 1743, while going to visit friends, Newton was captured and pressed into the naval service by the Royal Navy. He became a midshipman aboard HMS Harwich. 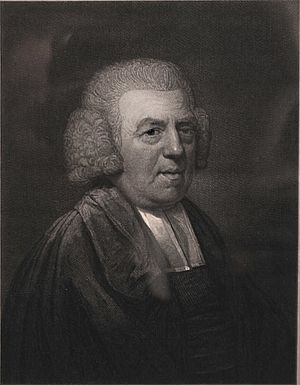 Plagued by ill health and failing eyesight, Newton died on 21 December 1807 in London. He was buried beside his wife in St. Mary Woolnoth in London. Both were reinterred at the Church of St. Peter and Paul in Olney in 1893.

All content from Kiddle encyclopedia articles (including the article images and facts) can be freely used under Attribution-ShareAlike license, unless stated otherwise. Cite this article:
John Newton Facts for Kids. Kiddle Encyclopedia.