Olney ( rarely OL-nee) is a market town and civil parish in the Borough of Milton Keynes, South East England, United Kingdom. It is also part of the ceremonial county of Buckinghamshire, with a population of around 6,500 people. It lies on the River Great Ouse, very close to the borders with Bedfordshire and Northamptonshire and equidistant from Northampton, Bedford and Milton Keynes. It has easy access to the M1 at Junction 14 (approximately seven miles) and fast train links to London from Milton Keynes Central or Bedford (each approximately twelve miles distant). It is a popular tourist destination, perhaps best known for the Olney Pancake Race and for the Olney Hymns by William Cowper and John Newton.

First mentioned as Ollanege (Olla's island) in 932, the town has a history as a lace-making centre. During the English Civil War, Olney was the site of the Battle of Olney Bridge.

In the late 18th century, William Cowper and John Newton collaborated here on what became known as the Olney Hymns. John Newton, author of the hymn "Amazing Grace," was curate of Olney and is buried here. His guest was William Cowper (English poet and hymnodist (1731–1800)).

The town has the Cowper and Newton Museum dedicated to them. The museum was adapted from Cowper's former residence, which was given to the town in 1905 by the publisher William Hill Collingridge (who had been born in the house). Newton was succeeded as curate in Olney by the biblical commentator Thomas Scott (1747–1821).

The hamlet of Olney Park Farm to the north of the town of Olney derives its name from a park established in 1374 by Ralph, Third Baron Bassett of Sapcote in Leicester. In 1861 it attained civil parish status, but was subsequently incorporated into an enlarged Olney civil parish around 1931.

Olney formerly had its own railway station on the line from Bedford to Northampton, but the line was closed in 1962. 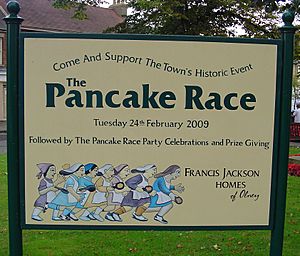 Since 1445, a pancake race has been run in the town on many Pancake Days, the day before the beginning of Lent. Tradition records that in 1445 on Shrove Tuesday, the "Shriving Bell" rang out to signal the start of the Shriving church service. On hearing the bell a local housewife, who had been busy cooking pancakes in anticipation of the beginning of Lent, ran to the church, frying pan still in hand, tossing the pancake to prevent it from burning, and dressed in her kitchen apron and headscarf.

The women of Olney recreate this race every Shrove Tuesday (known in some countries as Mardi Gras or Fat Tuesday) by running from the market place to the Church of St. Peter and St. Paul, a distance of over 400 yards. The traditional prize is a kiss from the verger. In modern times, Olney competes with the town of Liberal, Kansas in the United States for the fastest time in either town to win the "International Pancake Race". There is also a children's race, run by children from the local schools. The children have to run a distance of about 20 yards. This competition has been run every year since 1950.

A signpost in Olney

The A509 road runs into the wide High Street bordered by historic town houses. The Market Place is the site of a general market on Thursdays and a farmers' market on the first Sunday each month. The vast majority of Olney shops are independents, attracting shoppers from further afield to find the galleries, antique, rug and furniture sellers, as well as boutiques for interior design, fashionable clothes and perfumery. There are restaurants, pubs, cafes and takeaways that offer a wider variety of British and international food.

As Olney continues to expand, with new housing estates, a secondary-level satellite campus, Ousedale School has opened for pupils from year 7 to year 11. Olney Infants School is for reception to year 2 children and Olney Middle School takes the children up to year 6, at the age of 11.

The route for an A509 by-pass may continue to be an issue for the residents of the town, as are the various wind farm sites proposed in the locality.

All content from Kiddle encyclopedia articles (including the article images and facts) can be freely used under Attribution-ShareAlike license, unless stated otherwise. Cite this article:
Olney, Buckinghamshire Facts for Kids. Kiddle Encyclopedia.