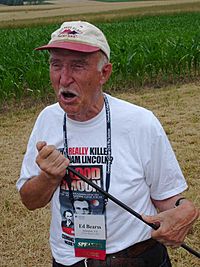 He was known for his work on the American Civil War and World War II eras. He was a tour guide of historic battlefields for The Smithsonian Associates and was Chief Historian of the National Park Service from 1981 to 1994. He was born in Billings, Montana.

All content from Kiddle encyclopedia articles (including the article images and facts) can be freely used under Attribution-ShareAlike license, unless stated otherwise. Cite this article:
Ed Bearss Facts for Kids. Kiddle Encyclopedia.