Omdurman (standard Arabic: أم درمان‎code: ar is deprecated Umm Durmān) is the most populated city in Sudan and Khartoum State, lying on the western banks of the River Nile, opposite the capital, Khartoum.

The name Omdurman (Umm Durmān) literally translates as "Mother of Durmān", but who she was or might have been is not known. 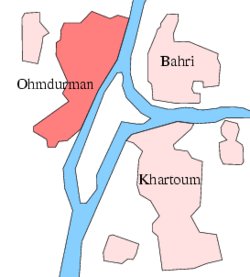 A map of Omdurman with Khartoum and Bahri.

After the siege of Khartoum the city, now the location of the tomb of the Mahdi, grew rapidly. However, in the Battle of Omdurman in 1898 (which actually took place in the nearby village of Kerreri), Lord Kitchener decisively defeated the Mahdist forces and killed Abdallahi ibn Muhammad, the Khalifa, ensuring British control over the Sudan.

In September 1898 the British army of twenty thousand well drilled men equipped with the latest arms, Maxim guns and Martini-Henry rifles under the command of General Herbert Horatio Kitchener invaded Sudan. In the battle of Omdurman, the British Army faced Sudanese defenders consisting of over 52,000 poorly armed desert tribesmen dervishes; in the space of five hours the battle was over. The Sudanese defenders suffered over 93 percent casualty with at least 10,000 killed. By contrast there were fewer than four hundred casualties on the British side with forty-eight British soldiers losing their lives. Then, General Kitchener proceeded to order the destruction of the Mahdi's tomb and in Churchill's words "carried off the Mahdi's head in a kerosene can as a trophy".

Kitchener restored Khartoum as the capital and, from 1899 until 1956 Sudan was jointly governed by Great Britain and Egypt. Although most of the city was destroyed in the battle, the Mahdi's tomb was restored and refurbished.

On 10 May 2008 the Darfur rebel group of the Justice and Equality Movement moved into the city where they engaged in heavy fighting with Sudanese government forces. Their goal was to topple Omar Hassan al-Bashir's government.

Omdurman features a hot arid climate, with only the summer months seeing noticeable precipitation. The city averages a little over 155 millimetres (6.1 in) of precipitation per year. Based on annual mean temperatures, the city is one of the hottest major cities in the world. Temperatures routinely exceeds 40 °C (104 °F) in mid-summer.

Its average annual high temperature is 37.1 °C (99 °F), with six months of the year seeing an average monthly high temperature of at least 38 °C (100 °F). Furthermore, throughout the year, none of its monthly average high temperatures falls below 30 °C (86 °F). During the months of January and February, while daytime temperatures are generally very warm, nights are relatively cool, with average low temperatures just above 15 °C (59 °F). 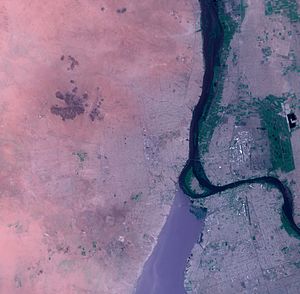 Omdurman is on the western side of the Nile river, opposite Khartoum. 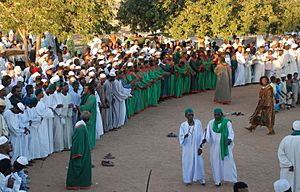 According to Sudanese officials, a new airport facility has been proposed 30 miles (50 km) south of Omdurman. Arguably speaking to be within the non-defined boundaries of Omdurman, the project was estimated to be completed by 2012 with an estimated budget of $530 million.

All content from Kiddle encyclopedia articles (including the article images and facts) can be freely used under Attribution-ShareAlike license, unless stated otherwise. Cite this article:
Omdurman Facts for Kids. Kiddle Encyclopedia.