States of Sudan facts for kids

Below is a list of the 25 states of Sudan. As Sudan was under British rule, they are organized by their original provinces under British rule. Arabic language versions are in parentheses. States that were not provinces before 1994 are marked with (*). Transliterations from Arabic to English may vary; in particular, the article "al" is sometimes transliterated as "el". Numbers correspond to those of the map at right. 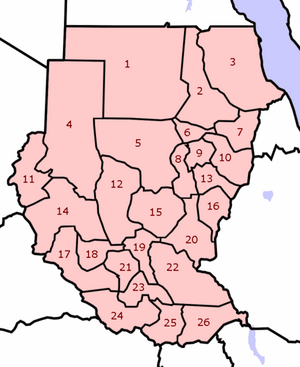 Anglo-Egyptian Sudan had eight mudiriyat, or provinces, which were ambiguous when created but became well defined by the beginning of the Second World War. The eight provinces were: Blue Nile, Darfur, Equatoria, Kassala, Khartoum, Kurdufan, Northern, and Upper Nile. In 1948 Bahr al Ghazal split from Equatoria.

A further fracturing of provinces occurred in 1976. Lakes split from Bahr al Ghazal, and Jonglei split off from Upper Nile. Equatoria divided into East and West Equatoria. There were thus eighteen provinces. In 1991, the government reorganized the administrative regions into nine federal states, matching the nine provinces that had existed from 1948 to 1973. On 14 February 1994, the government reorganized yet again, creating twenty-six wilayat (states). The majority of the wilayat were either the old provinces or administrative subregions of a province. As part of the new government structure in South Sudan in 2005, Bahr al Jabal was renamed Central Equatoria. In 2006, West Kurdufan was split and merged with North Kurdufan and South Kurdufan.

All content from Kiddle encyclopedia articles (including the article images and facts) can be freely used under Attribution-ShareAlike license, unless stated otherwise. Cite this article:
States of Sudan Facts for Kids. Kiddle Encyclopedia.