Bo (October 9, 2008 – May 8, 2021) was a pet dog of the Obama family, the former First Family of the United States. Bo was a male Portuguese Water Dog. President Barack Obama and his family were given the dog as a gift after months of speculation about the breed and identity of their future pet. The final choice was made in part because eldest daughter Malia's allergies dictated a need for a hypoallergenic breed. Bo was occasionally called "First Dog". In August 2013, Bo was joined by Sunny, a female dog of the same breed. Bo was named by sisters Malia and Sasha after their cousins' cat and First Lady Michelle Obama's father, in reference to the R&B musician Bo Diddley, although the name also makes up the initials of Barack Obama (B.O.). Bo was also famous for being the First Dog of the United States from April 14, 2009 – January 20, 2017. 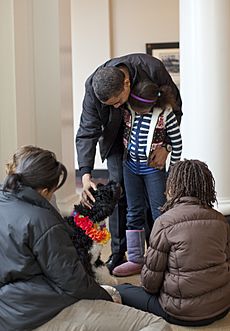 The Obamas with Bo

Bred by Martha and Art Stern of Amigo Portuguese Water Dogs in Boyd, Texas, Bo was a son of "Watson" — of the Rader family in Pittsburgh's Ambridge suburb — and "Penny", belonging to Art and Martha Stern. One of Bo's nine litter mates was Senator Ted Kennedy's dog named "Cappy" (Amigo's Captain Courageous); the litter was named "Hope and Change", in honor of Obama's victory.

Bo's original buyer is unknown, but eventually they returned him to the Stern family; purchasing Bo required signing a contract to return him to his breeder if things did not work out. Bo enrolled with Kennedy's obedience trainer Dawn Sylvia-Stasiewicz, in Hume, Virginia, on January 5, 2009.

Bo's brother, Rico, is owned by a couple in Houston, Texas.

Selection of the dog

At his first press conference as President-elect, Obama was questioned by reporters as to which breed the family was looking to acquire; he replied, "We have two criteria that have to be reconciled. One is that Malia is allergic, so it has to be hypoallergenic. There are a number of breeds that are hypoallergenic. On the other hand, our preference would be to get a shelter dog, but, obviously, a lot of shelter dogs are mutts like me. So – so whether we're going to be able to balance those two things, I think, is a pressing issue on the Obama household."

George Stephanopoulos asked Obama on television in early January what kind of dog they would get, and when, saying that he was passing on a question from Obama's daughters who were sitting in the control room. Obama said, "They seem to have narrowed it down to a labradoodle or a Portuguese water hound ... medium-sized dog, and so, we're now going to start looking at shelters to see when one of those dogs might come up." Much was made by the public and press about the family's search for a dog. On April 12, 2009, it was announced that the Obamas would soon accept a six-month-old Portuguese Water Dog puppy as a gift from Senator Kennedy. The dog was reported to have visited the family some weeks earlier in a secret meeting to gauge compatibility and purportedly referred to by staffers as "The Meeting". However, the gift was not accepted until the dog officially arrived and moved in at the White House on Tuesday, April 14, 2009. Immediately after he arrived, the family staged a photo op with Bo on the property's South Lawn. At the conference, Obama was asked if he would allow Bo inside the Oval Office, to which he responded: "of course." He also gave a nod to President Harry Truman's quote, "If you want a friend in Washington, get a dog." The White House website was later updated to include official pictures and biographical details of Bo. 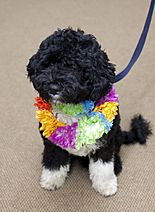 Bo wearing a lei upon his White House arrival

Listed by the name "Amigo's New Hope" with American Kennel Club's breed registry and given the name "Charlie" by his original owners, the puppy received his name from President Obama's two daughters, Malia and Sasha, in part after their cousins' cat and Michelle Obama's father's nickname Diddley; the dog is a namesake of singer Bo Diddley.

In June 2009, the White House released a baseball card for Bo with his new official portrait on one side and tongue-in-cheek statistics on the other; information included the facts that Bo's favorite food is tomatoes and that he does not yet know how to swim. The card is available by sending a self-addressed, stamped envelope to the White House.

As of August 2012, Bo was on a diet, though no other details were released (it was announced by the President during the Kids' State Dinner, where children from the states and territories who had won a contest to design healthy, appealing meals had lunch at the White House). 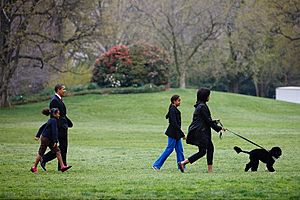 The Obamas walking with Bo

The Obamas originally voiced a strong desire to adopt a shelter dog, but made no firm commitments. In the summer of 2008, Best Friends Animal Society, an animal welfare organization, gathered 50,000 signatures on a petition asking the family to adopt a shelter animal.

As Bo is a gift through a breeder, he is not a shelter dog. Dog expert César Millán stated Bo could be considered part of a larger group known as "rescue dogs". He was unsuccessful in his first home when plans for him to provide companionship to an older female dog went awry; apparently his attempts to suckle irritated her. The Obamas pledged a donation to the DC Humane Society in a show of support for shelter dogs.

Some animal welfare supporters criticized The White House for not adopting a shelter dog. The Humane Society of the United States released a statement thanking the Obamas "for taking in a second-chance dog," but also discouraged going through breeders.

Reactions by and in the media 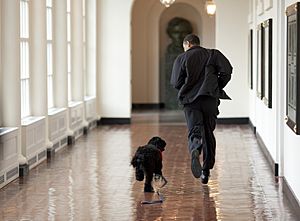 People for the Ethical Treatment of Animals (PETA) described the family's choice to accept the gift of a puppy from a family friend as "disquieting" and publicly urged Obama to have Bo neutered, despite the fact that the dog had been neutered before the Obamas received him. 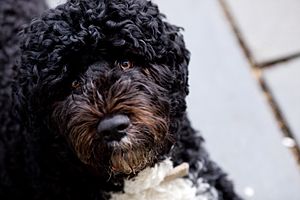 In anticipation of increased interest in the breed, the Portuguese Water Dog Club of America issued a statement requesting that members of the public considering obtaining the dogs "ensure that this breed fits their lifestyle", advising that the dogs' needs preclude their being left alone for long periods or boarded in kennels.

Immediately upon Bo joining the First Family, four children's books and a plush toy depicting him were slated for publication or manufacture.

On July 17, 2009, the author Ben Greenman, writing in The New York Times as Bo, reflected on his first hundred days in office.

In the final episode of the History Channel's Life After People, aired March 16, 2010, the producers imagined what life would be like for Bo after the disappearance of humanity. This speculated that he would leave the White House, and live off seafood from the Chesapeake Bay.

Bo was also shown on Dogs 101, as part of segment about the breed.

Bo has appeared in the comic book Lockjaw and the Pet Avengers and on the television shows Late Night with Seth Meyers and Ellen. On Meyers' show, He was the subject of a "Barney Cam" parody in which Bo is supposedly shown to be shamelessly manipulating White House staffers and guests (such as by finding and planting classified information in the bag of speechwriter who refused to give him treats).

Bo has been nicknamed "Bobama".

All content from Kiddle encyclopedia articles (including the article images and facts) can be freely used under Attribution-ShareAlike license, unless stated otherwise. Cite this article:
Bo (dog) Facts for Kids. Kiddle Encyclopedia.