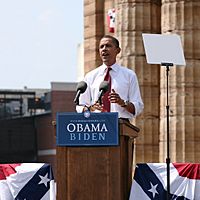 Obama at a campaign rally in Springfield, Illinois, August 2008

Barack Obama, then a junior United States Senator from Illinois, announced his candidacy for the presidency of the United States in Springfield, Illinois, on February 10, 2007. On August 27, 2008, he was declared nominee of the Democratic Party for the 2008 presidential election. He was the first African American in history to be nominated on a major party ticket. On August 23, 2008, Barack Obama's campaign announced that Senator Joe Biden of Delaware would be the Vice Presidential nominee.

On November 4, 2008, Obama won the election, making him the President-elect and the first African American elected President of the United States. He is the third sitting Senator, after Warren G. Harding and John F. Kennedy, to be elected President.

His constitutional election to the office was completed with the meeting of the Electoral College on December 15, 2008, and the subsequent certification of the college's vote by the Joint Session of the United States Congress on January 8, 2009. The Headquarters of Obama's campaign was in his home town of Chicago, Illinois.

All content from Kiddle encyclopedia articles (including the article images and facts) can be freely used under Attribution-ShareAlike license, unless stated otherwise. Cite this article:
Barack Obama presidential campaign, 2008 Facts for Kids. Kiddle Encyclopedia.