Glen Ellen is a census-designated place (CDP) in Sonoma Valley, Sonoma County, California, USA. The population was 784 at the 2010 census, down from 992 at the 2000 census. Glen Ellen is the location of Jack London State Historic Park (including the Wolf House), Sonoma Valley Regional Park, and a former home of Hunter S. Thompson. 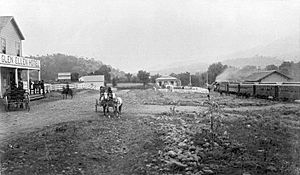 In 1859, Charles V. Stuart purchased a part of the Rancho Agua Caliente land grant and in 1868 began building a house there, eventually establishing a 1,000-acre (4.0 km2) vineyard he named Glen Ellen after his wife. The town that grew up around the vineyard also came to be called Glen Ellen, and Stuart's home was later renamed Glen Oaks Ranch.

Glen Ellen is about 6 miles (9.7 km) northwest of the city of Sonoma. The United States Census Bureau fixes the total area at 2.1 square miles (5.4 km2), 99.95% of it land and 0.05% covered by water. Sonoma Creek, the principal river of the Sonoma Valley flows through Glen Ellen.

The Census reported that 98.3% of the population lived in households and 1.7% lived in non-institutionalized group quarters.

Writer Jack London lived in Glen Ellen from 1909 to his death in 1916, where he devoted much of his time to development of his Beauty Ranch and the building of his mansion, Wolf House. Many of his novels and stories, notably The Iron Heel and The Valley of the Moon mention Glen Ellen and Sonoma County. ("The Valley of the Moon" is a translation of Sonoma Valley's name given by the Pomo and Coast Miwok peoples.)

The site of his ranch is now Jack London State Historic Park, which contains the ruins of Wolf House, several ranch buildings, the grave of Jack and Charmian London, and a museum housed in Charmian London's "House of Happy Walls." The Wolf House Restaurant discontinued daily restaurant service in January 2008, but is open for special events. The Bar remains open.

Glen Ellen is also the home of several gourmet star restaurants such as:

The Sonoma Developmental Center is located just outside Glen Ellen near the Jack London ranch. Its predecessor, the California Home for the Care and Training of Feeble Minded Children, was the setting for Jack London's story "Told in the Drooling Ward."

Glen Ellen is located in the Wine Country and is part of the Sonoma Mountain AVA. Like all the communities in Sonoma Valley, Glen Ellen is home to many vineyards and wineries including B.R. Cohn Winery, Benziger Family Winery, Mayo Family Winery, and Valley of the Moon Winery.

The city of Sonoma, approximately 5 miles (8.0 km) away, is considered the birthplace of California and contains three (#'s 3, 4, and 7) of the first ten California Historical Landmarks.

On the other side of Sonoma Mountain, but only about three miles (5 km) away on the map, is the Fairfield Osborn Preserve, a diverse ecological study area with limited access hiking trails.

Dunbar school is the second oldest school in California. Dunbar School is an elementary school that teaches grades K-5. Their mascot is the Dolphins and it is part of the Sonoma Valley Unified School District.

All content from Kiddle encyclopedia articles (including the article images and facts) can be freely used under Attribution-ShareAlike license, unless stated otherwise. Cite this article:
Glen Ellen, California Facts for Kids. Kiddle Encyclopedia.