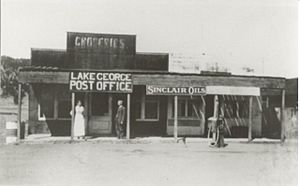 About 42.3 miles (68.1 km) northwest of Colorado Springs and 7.3 miles (11.7 km) northwest of Florissant, the town of Lake George was established in 1891 as a railroad stop for the Colorado Midland Railway (CM) which had been completed in 1887. The town and nearby lake—to its west and fed by the South Platte River—The man made lake was built by George Frost for the purpose of supplying ice to the railroad. The lake, originally called George's Lake was later changed to Lake George when the post office opened. The lake itself freezes mostly solid in the wintertime, which made it ideal for railroad men to cut large blocks of ice from it in order to keep perishables cool. A privately owned ice company here supplied the needs of much of the Pikes Peak region. Ice cut during the winter was shipped on the CM to both Colorado Springs and the Cripple Creek, Colorado district. Also related to the town's railroading history, a short walk into the surrounding hills reveals Chinese bread ovens, from the period their labor was imported. At the turn of the century the community's population was 30. After 1900 some farmers and ranchers nearby began raising high-altitude potatoes on a limited scale. This furnished the CM with some additional traffic. However, the CM closed in August 1918. Other railways then provided service to certain shippers along the otherwise idle CM railway. Up to that time this had been the shortest rail route through the mountains. Keeping the track open during winter proved expensive, and when the mining of ore dwindled, the tracks were torn up. U.S. Highway 24 follows the abandoned grade of the CM railway. By 1941 the community had grown to 100 persons and was the center of an extensive potato growing area. The community's population in 1965 was 100.

Nearby is Camp Alexander, the Scout camp for Pikes Peak Council, as well as the Elevenmile Reservoir.

All content from Kiddle encyclopedia articles (including the article images and facts) can be freely used under Attribution-ShareAlike license, unless stated otherwise. Cite this article:
Lake George, Colorado Facts for Kids. Kiddle Encyclopedia.