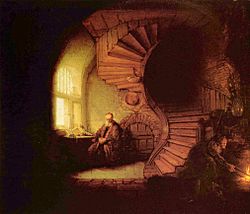 A wise old man: "Philosopher in Meditation" by Rembrandt

The sage (also called wise old man or "Senex") is a character who often appears in literature and mythology. He is an old man who is very wise. In times of trouble people go to ask the sage for advice. The sage is a very calm, intelligent old man. He is like a father-figure or grandfather-figure. He gives sensible advice or judgment.

In some stories the sage is seen as"foreign" in some way, that is, he is different from the other people of that culture. Merlin is a good example of this, as he was only half human.

The psychologist Carl Jung called him a senex. This is Latin for old man. Jung sees him as someone who realizes that the young person is going to be the hero of the story, and he himself is just an advisor.

All content from Kiddle encyclopedia articles (including the article images and facts) can be freely used under Attribution-ShareAlike license, unless stated otherwise. Cite this article:
Sage Facts for Kids. Kiddle Encyclopedia.