The fashion house also produces accessories, fragrances, makeup and home furnishings as well as clothes. Versaci also designed costumes for the theatre and movies, and was a friend of Elton John, Sting, and Princess Diana among many others.

Openly gay, Versace and his partner Antonio D'Amico were regulars on the international party scene. 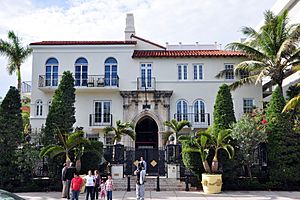 Versace was shot dead on 15 July 1997, aged 50, on the steps of his Miami Beach mansion, as he returned from a morning walk on Ocean Drive. It was his custom to take a stroll to a coffee shop that received international periodicals, to read the Italian-language newspapers. He was murdered by spree killer Andrew Cunanan. Versace's body was cremated and his ashes returned to the family's estate near Cernobbio, Italy.

In September 1997, it was announced Versace's brother, Santo Versace, and Jorge Saud would serve as the new CEOs of Gianni Versace S.P.A. Versace's sister, Donatella, became the new head of design.

In his will, Gianni Versace left 50 percent of his fashion empire to his niece Allegra Versace, daughter of Donatella. Allegra inherited this stake, worth around half a billion dollars, when she turned 18 in 2004. Her younger brother, Daniel, inherited Versace's rare artwork collection.

All content from Kiddle encyclopedia articles (including the article images and facts) can be freely used under Attribution-ShareAlike license, unless stated otherwise. Cite this article:
Gianni Versace Facts for Kids. Kiddle Encyclopedia.