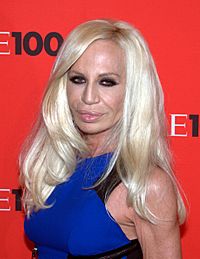 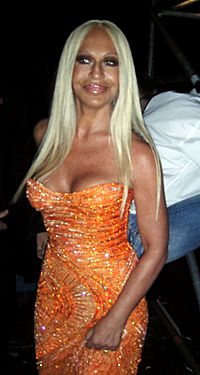 Donatella Versace (born 2 May 1955) is an Italian fashion designer and a current part-owner of the Versace fashion line. She is now their chief designer.

She was born in Reggio Calabria. She owns 20 percent of the entire stock market assets of Versace. Her brother, Santo Versace, owns 30 percent. Donatella's daughter Allegra Versace inherited 50% of the company stock. They inherited the company from Donatella's brother Gianni Versace after he was murdered.

A year and three days after Gianni's death in July 1998, Donatella Versace mounted her first couture show for the Versace Atelier at the Hôtel Ritz Paris. She built her runway over the hotel's swimming pool, using sheer glass. She now oversees the production of a dozen collections each year. Donatella is just as famous for her celebrity entourage and glittering parties. Regular guests include Sir Elton John, Elizabeth Hurley, Rakeem Young, Catherine Zeta-Jones and Kate Moss. Even Prince Charles attends Donatella's parties for the famous and elite in Europe.

Lady Gaga wrote the song "Donatella" from her 2013 album Artpop for Versace.

All content from Kiddle encyclopedia articles (including the article images and facts) can be freely used under Attribution-ShareAlike license, unless stated otherwise. Cite this article:
Donatella Versace Facts for Kids. Kiddle Encyclopedia.